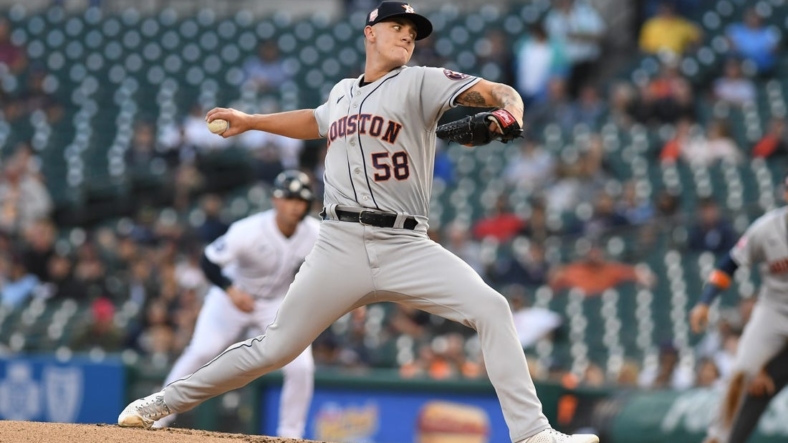 Brown. making his second Major League start, allowed two runs and five hits while walking two and striking out six. Brown (2-0) grew up in the Detroit area and attended Wayne State University in the city.

Ryan Pressly struck out the side in the ninth for his 27th save.

Alvarez opened the scoring with his two-out homer in the first, his 33rd of the season.

The Tigers pushed across a run in the second. Spencer Torkelson drew a one-out walk and scored on Eric Haase’s double down the left-field line.

Houston quickly regained the advantage with three two-out runs in the third. Alvarez doubled to right and scored on Alex Bregman’s single. Tucker then blasted a Hutchison slider over the right-field wall for his 26th homer to make it 4-1.

The Tigers got one of those runs back in the bottom of the inning on Akil Baddoo’s triple and Riley Greene’s run-scoring single.

Houston threatened again in the sixth. Aledmys Diaz reached on a fielding error by Javier Baez. Mauricio Dubon followed with a double, ending Hutchison’s night. With two outs, Alex Lange hit Jose Altuve with a pitch to load the bases. Lange then struck out Jeremy Pena to keep his team within two runs.

After Alvarez walked in the seventh, Greene robbed Bregman of an extra-base hit with a diving catch in deep right-center. The Astros still extended their lead in the inning, as Gurriel lifted an Andrew Chafin offering over the left-field wall for his eighth homer.

Clemens hit his fourth homer of the season in the bottom of the inning off Hector Neris to cut the deficit to 6-3.