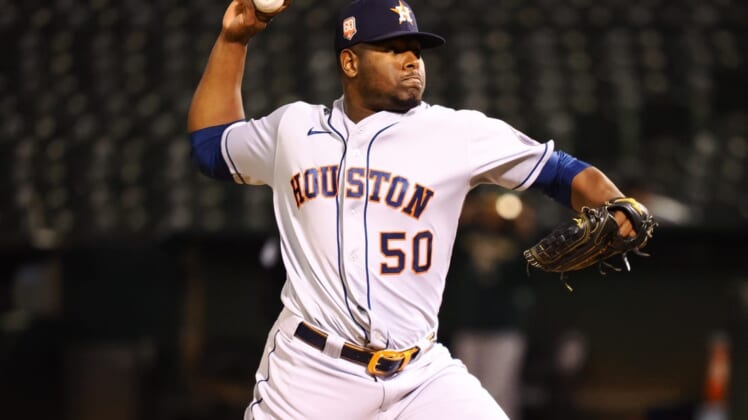 Houston Astros right-handed pitcher Hector Neris received a four-game suspension and an undisclosed fine Tuesday for intentionally throwing at a batter’s head during Monday’s home game against the Seattle Mariners.

Astros manager Dusty Baker was fined and suspended for one game for Neris’ actions, per Major League Baseball policy. Mariners manager Scott Servais and Astros coaches Joe Espada, Omar Lopez and Troy Snitker all were assessed undisclosed fines for what MLB called “actions that contributed to causing the incident.”

Neris is appealing his suspension, so it will be held in abeyance for the time being. Baker will serve his suspension Tuesday when the Astros play the Mariners.

Neris drilled Seattle’s Ty France in the back with a pitch during the ninth inning of Monday’s game. Servais left the dugout and Mariners players followed him into the scuffle.

The umpire ejected Servais and issued warnings to both teams. But not long after Mariners rookie Julio Rodriguez hit a two-run homer off Neris to extend Seattle’s lead to 7-4, Neris threw a pitch that zipped by Eugenio Suarez’s head. Neris was ejected.

Neris has a disciplinary history with the league. A similar incident occurred when he played for the Philadelphia Phillies in 2019, when he plunked David Freese of the Los Angeles Dodgers and was suspended three games.

Neris, who turns 33 next week, is in his first season in Houston after playing parts of eight seasons with Philadelphia. In 26 relief appearances this year, he is 1-2 with a 3.00 ERA.

Bad blood has simmered between the American League West rivals in recent years. In July of last year, then-Astros pitcher Brooks Raley intentionally hit Mariners shortstop J.P. Crawford with a pitch and earned a three-game ban. Servais angrily left the dugout in that case, too, though it didn’t turn into a brawl.