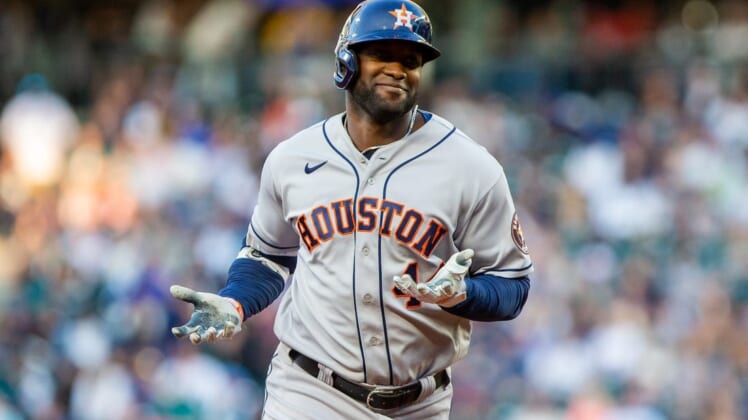 Mariners All-Star Julio Rodriguez, the rookie who became a sensation when he reached the final of the Home Run Derby earlier in the week, was a late scratch with left wrist soreness.

Ty France homered for Seattle, which fell a game shy of tying the franchise record for most consecutive victories set in 2001.

Urquidy (9-4), a right-hander who had lost his three previous starts against Seattle this season and failed to complete five innings in any of them, allowed one run on four hits. Hector Neris worked the ninth for his first save of the season.

Trailing 5-0, France went deep to center leading off the bottom of the sixth.

The Mariners threatened in the eighth, loading the bases with one out on a J.P. Crawford single and two walks. Astros manager Dusty Baker brought in Ryne Stanek, who walked Eugenio Suarez to force in a run. Shortstop Jeremy Pena made a leaping catch on a liner by Kyle Lewis for the second out and Stanek fanned Cal Raleigh on a 100-mph fastball at the top of the strike zone to end the threat.

Lewis was playing for the first time since May 28 — when he suffered a concussion when hit in the head by a pitch from Urquidy.

Mariners left-hander Marco Gonzales (5-10) was undone by the long ball. He went 5 2/3 innings and allowed five runs on nine hits.

Leading off, Altuve hit the game’s third pitch over the center-field wall.

Alvarez led off the fourth with a blast to center. It was his 28th homer of the season, second only to the New York Yankees’ Aaron Judge in the American League.

With one out in the fifth, Maldonado homered down the left-field line to make it 3-0. Altuve and Jeremy Pena followed with singles and Alvarez hit a sacrifice fly to left.

The Astros chased Gonzales in the sixth. With two outs, Aledmys Diaz doubled to right and Jake Meyers lined a run-scoring single to left to make it 5-0.