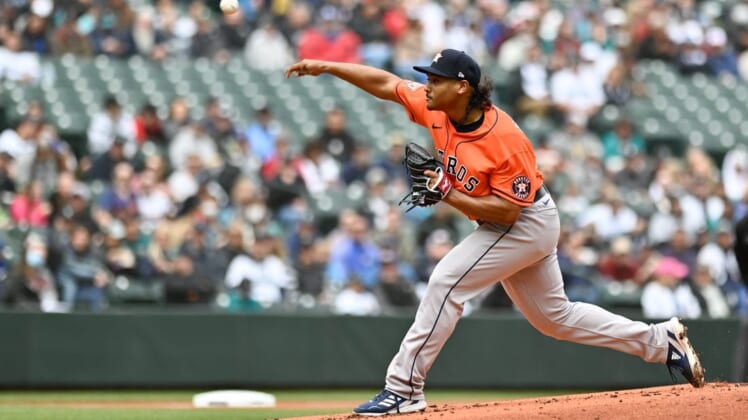 Yordan Alvarez lined a run-scoring single to the opposite field with two outs and the bases loaded in the eighth inning to break a tie and give the Houston Astros a 2-1 victory against the host Seattle Mariners on Sunday afternoon.

Ryan Pressly got out of a bases-loaded jam in the ninth inning to earn his eighth save of the season, inducing Luis Torrens to ground into a game-ending double play.

Jeremy Pena homered in the second inning as Houston salvaged the finale of the three-game series after losing by scores of 6-1 and 6-0.

It was quite a pitching duel between Astros right-hander Luis Garcia and Mariners lefty Marco Gonzales.

Garcia retired the first 13 batters he faced before walking Eugenio Suarez on a 3-2 count with one out in the fifth.

Seattle’s first hit came on Torrens’ single to right leading off the sixth. Taylor Trammell put down a sacrifice bunt to move him to second, and Torrens scored on Ty France’s two-out single to right.

France advanced on a throwing error by right fielder Jose Siri but Garcia got out of the jam as rookie Julio Rodriguez hit a scorching liner to a perfectly positioned Alex Bregman, who was playing close to the third base line.

The Mariners threatened in the seventh as J.P. Crawford and Suarez lined singles. Garcia was replaced by Rafael Montero (2-0) and Adam Frazier bunted the runners to second and third. Montero, a former Mariner, struck out Mike Ford and Torrens to end the inning.

With one out in the eighth, Houston’s Martin Maldonado hit a ground-rule double down the left-field line, ending Gonzales’ afternoon. Paul Sewald got Jose Altuve to ground out to third before intentionally walking Michael Brantley to bring up Bregman, who walked on a 3-2 pitch to load the bases. The left-handed hitting Alvarez lined an 0-1 pitch into left to break the tie.

Garcia went six-plus innings and allowed one run on four hits, with one walk and six strikeouts.

Gonzales (3-5) lasted 7 1/3 innings and was charged with two runs on five hits, with one walk and two strikeouts.