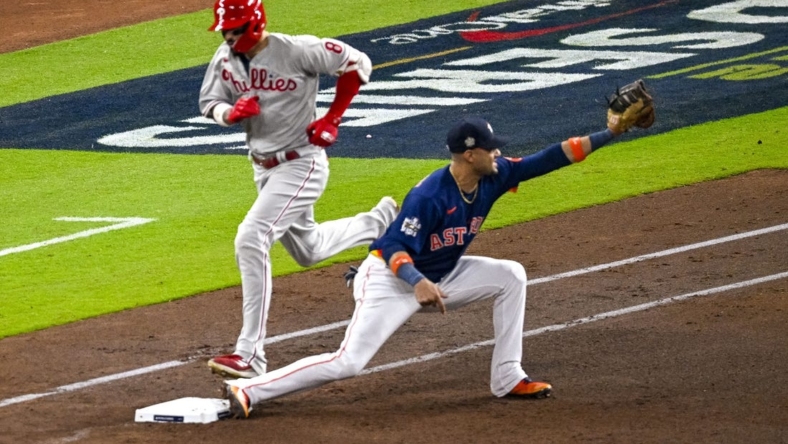 HOUSTON — Framber Valdez carried a shutout into the seventh inning and Alex Bregman slugged a two-run home run as the host Houston Astros beat the Philadelphia Phillies 5-2 on Saturday in Game 2 of the World Series.

The Astros squared the best-of-seven series at 1-1 with Game 3 set for Monday in Philadelphia.

Valdez (2-0) labored a bit over his first three innings, found his rhythm in the fourth and fifth, and recorded the biggest outs of the game as Philadelphia attempted to mount a rally in the sixth.

The Phillies mustered a baserunner in each of the first three innings, with Rhys Hoskins and Alec Bohm working one-out walks in the first and second before Kyle Schwarber recorded a one-out single in the third. Valdez worked around each baserunner and didn’t allow any to reach scoring position, yet needed 55 pitches to complete three scoreless frames of work.

Valdez retired the side in order in the fourth on 11 pitches and faced the minimum in the fifth when he induced Matt Vierling to roll into a 6-4-3 double play before getting a called third strike on Edmundo Sosa.

In the sixth, after Houston extended to a 5-0 lead, Valdez faced a threat.

After erasing a five-run deficit and winning the series opener 6-5, the Phillies fashioned the makings of a comeback when Schwarber and Hoskins reached in succession to open the sixth. But Valdez responded with a strikeout of J.T. Realmuto before getting Bryce Harper to ground into a 4-6-3 inning-ending double play.

Nick Castellanos doubled leading off the seventh and later scored but that was the lone tally against Valdez, who allowed four hits and three walks while striking out nine over 6 1/3 innings. Valdez threw 104 pitches, 70 for strikes, and had nine swings and misses on 42 curveballs.

After tagging Phillies starter Aaron Nola for five runs in Game 1, the Astros did the same to Phillies right-hander Zack Wheeler (1-2) on Saturday.

Houston became the first team in World Series history to open a game with three consecutive extra-base hits as Jose Altuve, Jeremy Pena and Yordan Alvarez doubled in succession to spark the Astros to a sudden 2-0 lead.

Alvarez followed with some daring baserunning, tagging from second on a Kyle Tucker flyout to center field and subsequently scoring when Sosa delivered an errant throw to first on a Yuli Gurriel grounder to short.

Wheeler held the Astros to three runs until the fifth, when Bregman blasted a 2-0 slider 405 feet to left-center field, scoring Alvarez and extending the lead to 5-0.

The Phillies kept pushing, placing runners on the corners against Astros reliever Rafael Montero with two outs in the eighth for Harper, whose popup to shallow right field nearly dropped before Pena made the running catch.