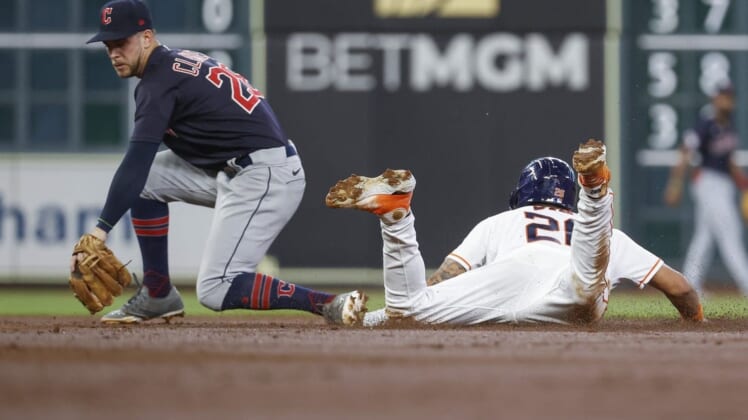 Cristian Javier matched a career high for strikeouts in consecutive starts as the Houston Astros capped a seven-game homestand with a 2-1 victory over the Cleveland Guardians Wednesday.

Javier (3-2) carried a shutout into the sixth inning while allowing three hits and one walk with nine strikeouts. Javier recorded nine strikeouts for the second time in as many starts, as the Astros closed the homestand 5-2 and concluded a grueling stretch of 33 scheduled games over 34 days with a 23-10 record.

Javier recorded his first six outs via the strikeout, with all six strikeouts swinging. He issued a four-pitch walk to Jose Ramirez with two outs in the first but followed by fanning Owen Miller on a 1-2 slider to complete the inning. Javier then struck out the side on 13 pitches in the second.

Guardians right fielder Steven Kwan, with 11 strikeouts in 131 plate appearances entering play Wednesday, was the first Cleveland starter to put the ball in play against Javier when he grounded out to second baseman Jose Altuve leading off the third. Kwan was the fifth of 12 consecutive batters retired by Javier, who fanned the leadoff batter in the fourth, fifth and sixth.

Javier worked around a broken-bat single by Ernie Clement with two outs in the fifth and departed after surrendering consecutive two-out hits to Amed Rosario and Ramirez in the sixth. Ramirez doubled to push Rosario to third base, but Ryne Stanek entered in relief of Javier and retired Miller to strand both runners in scoring position. Javier tossed a season-high 96 pitches.

The Astros finished 1-for-7 with runners in scoring position and scratched across solo runs in the fifth and sixth innings via a pair of sacrifice flies. Michael Brantley drove home Jose Siri, who opened the fifth with a double, for a 1-0 lead before Jason Castro doubled that margin with a fly ball to left that plated Yordan Alvarez, who worked a leadoff walk against Cal Quantrill (1-3).

Quantrill allowed two runs on six hits and four walks with three strikeouts over six innings. The Guardians mounted a threat against Astros left-hander Blake Taylor in the seventh, with Josh Naylor reaching on a leadoff walk and later scoring on a wild pitch from reliever Hector Neris.

Astros right-hander Ryan Pressly earned his seventh save with a perfect ninth inning.