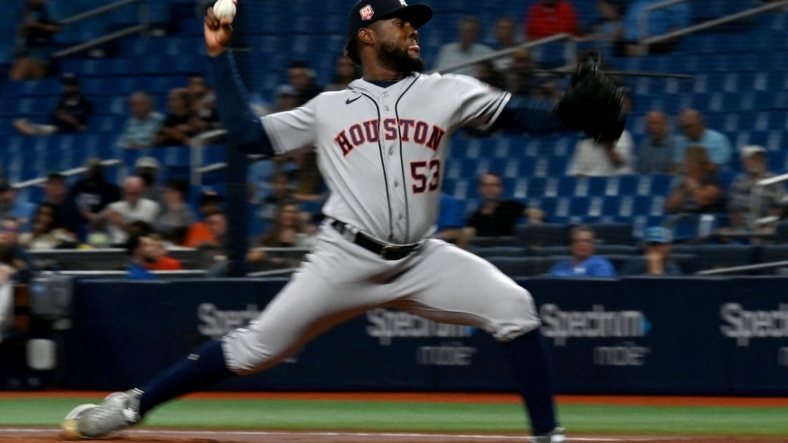 In the middle game of their three-game set with Tampa Bay, Houston (98-51) scored four times in the first three innings off McClanahan (12-6).

In taking the first two games of the series, Houston has outscored the home side 9-0 and pushed its season shutout total to 17.

Pena and Jose Altuve each had two hits and a walk. Batting leadoff, Altuve scored three runs as the Astros won for the ninth time in 10 games.

The right-hander allowed just one hit in five innings, with six strikeout and four walks.

The Rays (82-66) got two hits, including a double, and two walks from Wander Franco. Isaac Paredes walked twice.

In his second start since coming off the 15-day injured list for a shoulder impingement, McClanahan pitched four-plus innings but was removed after landing hard on a delivery and then shaking his left arm in the fifth.

With manager Kevin Cash and a member of the training staff coming out for a visit, McClanahan reiterated to Cash that he felt fine. However, the manager replaced him in favor of Shawn Armstrong.

The southpaw allowed five runs on five hits to go along with four walks and three strikeouts.

The Astros put up three more in the third, with Altuve again in the mix. After Martin Maldonado’s leadoff walk, Altuve stroked his second hit to put Houston in business.

Pena followed by belting a curveball from McClanahan deep to left-center for a 4-0 advantage. The shortstop’s 19th homer traveled an estimated 404 feet.

In the fifth, with McClanahan out of the game, Aledmys Diaz knocked in Altuve with a sacrifice fly.

The Rays loaded the bases with one out in the ninth, but Ryan Pressly struck out Ji-Man Choi and got a lineout from Bethancourt for his 29th save.