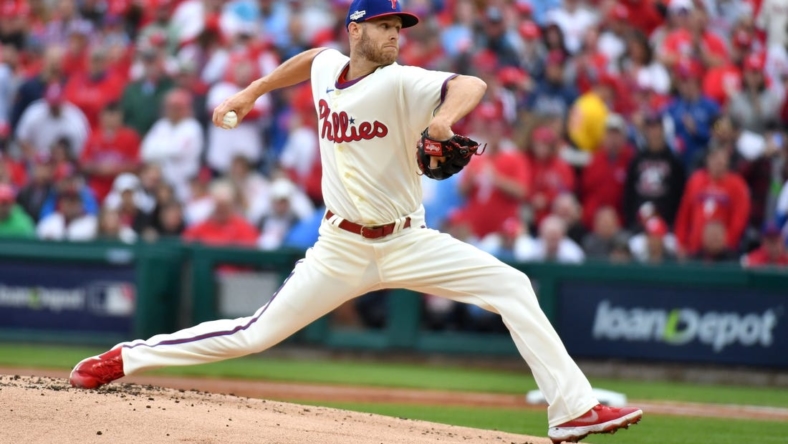 HOUSTON — In the aftermath of Phillies designated hitter Bryce Harper claiming MVP honors for the National League Championship Series and in advance of Game 1 of the World Series, Philadelphia manager Rob Thomson tinkered with the idea of elevating Harper in the batting order.

Sometimes, the best managerial moves are the ones left undone.

Harper remained in the cleanup spot on Friday just behind catcher J.T. Realmuto, who delivered a game-tying, two-run double in the fifth inning and the game-winning home run leading off the 10th as the Phillies topped the Houston Astros 6-5 to take the opener in the best-of-seven series.

The decision to keep the starting lineup static proved savvy for Thomson and the Phillies, who will try to take a 2-0 series lead on Saturday behind ace right-hander Zack Wheeler.

“Well, so I came in (Thursday) and I talked to (hitting coach) Kevin Long and I talked to (bench coach) Mike Calitri and I talked to a lot of the players about the lineup because I didn’t want to overthink it,” Thomson said. “And to a man, they were like, you know we’ve been swinging the bats pretty good right where we’re at. Everybody’s really comfortable with where we’re at, so that’s what we’re going with.”

Harper finished 2-for-4 with a walk and a run.

Valdez shined in his most recent outing, Game 2 of the American League Championship Series, when he allowed two unearned runs and recorded nine strikeouts over seven innings in a 3-2 win over the New York Yankees.

“I think the biggest difference from last year to this year has been the consistency,” Valdez said. “I think I’ve been a little bit more consistent this year on everything that I’ve done. I feel good with the results that I’ve gotten and hopefully continue to get more.”

After losing Game 1 for the third time in their past three World Series appearances, the Astros will need a composed Valdez to help them square the series before it shifts to Philadelphia for Games 3, 4 and (if necessary) 5. Given what they’ve seen of him thus far, they have reason to expect exactly that.

Asked what he needs from his starter in Game 2 following the Game 1 collapse, Astros manager Dusty Baker said, “We just need Framber to be Framber. Usually that’s enough runs for Framber and (Verlander), and it wasn’t enough tonight. We need some innings. They kind of went through their bullpen. We went through ours. So it’s matter of how far the starters can go tomorrow.”

Thomson pushed Wheeler back a day in the World Series rotation to give him an extra day’s rest. He has pitched at least six innings in each of his four starts during the 2022 postseason, potentially a good sign for the Phillies’ bullpen.

“Obviously I’m a little better with five days’ rest instead of four, so, yeah, I think it will help me,” Wheeler said.