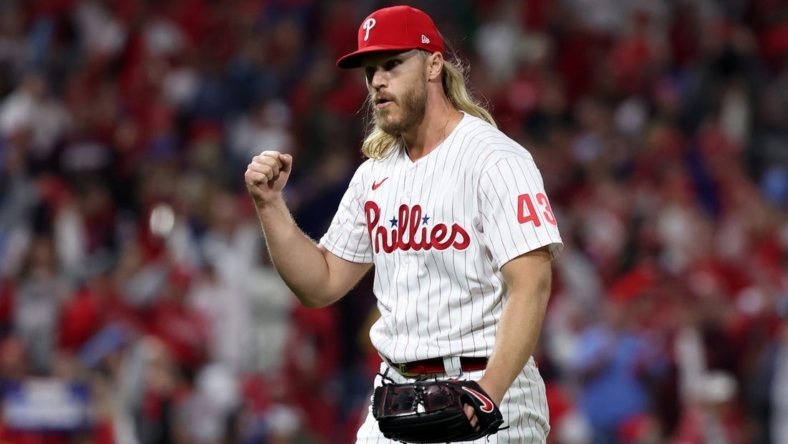 A raucous crowd is expected for Game 3 with the Philadelphia Phillies returning home to play host to the Houston Astros on Monday night with the World Series split at a game apiece.

Following an off day, the teams will square off before a crowd of more than 45,000 at Citizens Bank Park, where the Phillies are 5-0 this postseason.

“We feel like it’s another element that a visiting team is going to have to go through,” Kyle Schwarber said of the passionate fan base. “They have been great through this whole postseason.”

Despite the home-park advantage, Philadelphia is a consensus 1.5-run underdog ahead of Game 3.

Syndergaard, acquired at the trade deadline from the Los Angeles Angels, will be making his fourth appearance in this year’s playoffs.

Phillies manager Rob Thomson said that the plan is for Syndergaard to throw between three and four innings.

“I feel like I can go for as long as they’ll allow me to,” Syndergaard said. “Now is the time to empty the tank leaving nothing out.”

“He’s a big, strong guy,” Thomson said of his starter. “It’s the World Series. We’ll see how he does, see how he is. We’ll constantly communicate with him.”

McCullers Jr. will be making his first start in the World Series since 2017, when he started Game 7 against the Los Angeles Dodgers.

“Really looking forward to experiencing the crowd,” McCullers said. “I’ve heard a lot about it. I’m a really big fan of the game, and I think it will be a great moment.”

Astros manager Dusty Baker had several options regarding the starter for Game 3. Why go with McCullers?

“This is a very big game. I figure he can keep the ball in the ballpark pretty good with his sinker and his slider,” Baker said. “He holds runners on pretty good. Which they generally try to run a lot. Plus, I think he deserved it.”

PROP PICKS
Phillies RHP Noah Syndergaard Over 2.5 Strikeouts (+115 at DraftKings): Syndergaard hasn’t thrown more than 3.0 innings in three postseason appearances thus far, so how deep he goes will determine the outcome of this prop. Syndergaard isn’t the flamethrower he was a few years ago, but he did strike out three in as many innings against Atlanta in the divisional round and did have 18 games with at least that many during the regular season. The Astros struck out 12 times in Game 1 and six more in Game 2.

Run Scored in First Inning (+105 at BetMGM): The top of the Astros’ lineup has fueled an early charge in each of the first two games. It helps that Jose Altuve may have broken out of his slump with three hits following a 4-for-37 start to the postseason. Playing at home, the Phillies will need to show some patience at McCullers, who is likely to pound them with sliders.

Total Runs Over 8.0 (-105 at BetRivers): Houston has scored five runs in each of the first two games while Philadelphia has managed a total of eight. McCullers is a tough matchup for the Phillies, while Thompson won’t hesitate to turn to his bullpen if Syndergaard struggles early. But these remain two potent offenses capable of striking with a big inning throughout their lineups.

PREDICTION
Houston won 106 games during the regular season and brings an 8-1 postseason mark to Philadelphia. The Phillies now technically have home-field advantage, but the Astros have the clear advantage on the mound to start the game. –Astros 6, Phillies 4