Astros aim to get back on track vs. Braves 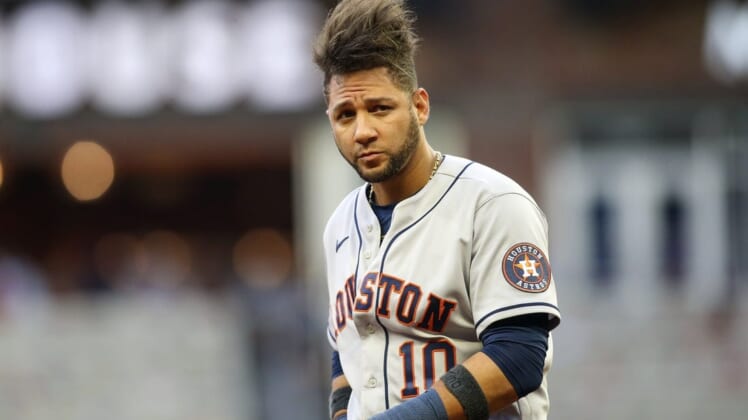 The Houston Astros had more on their minds Friday night than just a loss in their World Series rematch against the Atlanta Braves.

Alvarez exited due to shortness of breath in the middle of a Braves’ at-bat in the fifth inning of Friday’s 6-2 setback to Atlanta.

Astros manager Dusty Baker said Alvarez had good vital signs at Truist Park before the pitcher headed to a nearby emergency room for further examination.

“I looked up and he was in the dugout,” Baker said. “It was kind of a scary moment because it could be anything.”

“He had shortness of breath,” Baker said. “Then when they shot the fireworks off; the smoke made it worse.”

Alvarez is tied for first in the American League in on-base percentage (.400) and is second in home runs (31) and fourth in RBIs (77).

Chas McCormick moved from center to left field when Alvarez exited after Vaughn Grissom fouled off the first pitch of his at-bat against Lance McCullers Jr.

Mauricio Dubon went into the game at center field and batted in Alvarez’s spot but later exited after he injured his left elbow crashing into the wall in pursuit of Dansby Swanson’s double in the sixth inning. X-rays were negative, and Dubon is day-to-day.

The win was the 10th in the last 11 games for the Braves, who beat the Astros in six games in the World Series last October. Atlanta remains 3 1/2 games behind the first-place New York Mets in the National League East.

The Braves’ surge began after they lost four of five to the Mets in a series that ended Aug. 7. Atlanta won three of four games from New York before hosting the Astros.

“It was more or less a wake-up call for us,” Braves third baseman Austin Riley told reporters Friday night, referring to the series loss to the Mets. “We know (the Mets) are a really good team, and we know we’re a really good team. It was just a matter of all of us putting it together.”

Javier earned the win Sunday after allowing just one hit over six scoreless innings in a 6-3 victory over the Oakland Athletics. It was the third time in 18 starts this season in which Javier has allowed one hit or less over at least six innings.

Strider recorded the win Monday after permitting one run on three hits over five innings as the Braves rolled to a 13-1 victory over the Mets.

Javier has never faced the Braves in the regular season, although he was 0-1 with a 12.20 ERA in three relief appearances against Atlanta in the World Series.

Strider has yet to oppose the Astros.