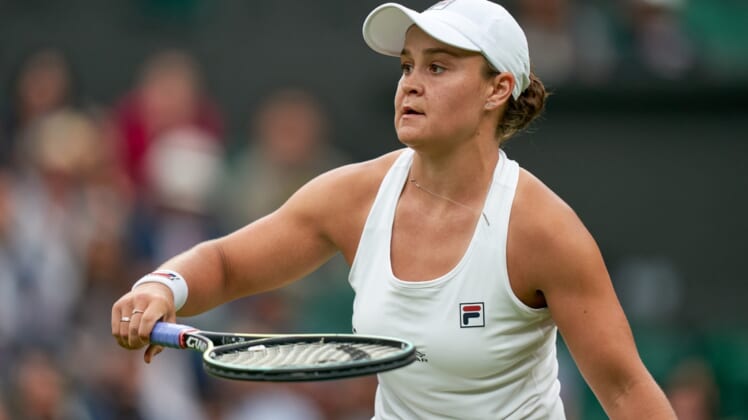 World No. 1 Ashleigh Barty was pushed to three sets by the 138th-ranked player in the world and Serena Williams was forced to retire in first-round Wimbledon action Tuesday at the All England Club in London.

Barty needed one hour, 44 minutes to dispatch Spain’s Carla Suarez Navarro 6-1, 6-7 (1), 6-1. It was just the second match for Suarez Navarro since she declared herself cancer free in April after being diagnosed with Hodgkin’s Lymphoma one year ago.

“It was incredible to be able to share this experience with Carla,” Barty said. “She’s a fighter, an incredible competitor, a lovely person and genuinely you won’t find one bad word about her. I wish both of us could have won. She’ll be very sorely missed.”

But the stunning result of the day involved the sixth-seeded Williams, who slipped on the grass in the first set of her match against Aliaksandra Sasnovich.

The injury occurred with Williams serving at 3-1. She lost her footing near the baseline on a forehand. She took an injury timeout after dropping the game and returned to action but retired at 3-3 after 34 minutes.

The seven-time Wimbledon champ was reduced to tears waving to the crowd as she left the court.

“Of course I’m so sad for Serena; she’s a great champion,” Sasnovich said. “It happens sometimes in tennis, but all the best for her and her recovery.”

American Venus Williams advanced to the second round with a 7-5, 4-6, 6-3 win over Romania’s Mihaela Buzarnescu in two hours, 37 minutes.