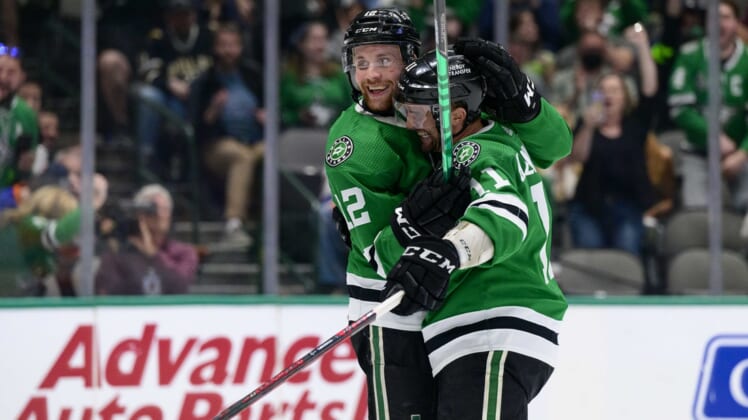 Playing well when it seems to matter most, the Dallas Stars should be familiar with the immediate challenge that awaits.

Dallas has won seven of the last nine games to remain in the mix for a playoff spot in the Western Conference. The Stars rebounded from a rough 4-1 loss at Seattle on Sunday by posting a 3-2 home win over the New York Islanders two nights later.

“There’s some stuff (watching the standings) we can’t control. So, we don’t have to think about that. Just focus (on) the game,” Dallas defenseman Miro Heiskanen said. “Whatever happens, try to focus.”

Dallas’ current run followed a rut of four losses in five games, including a 4-0 defeat at Toronto on March 15. Erik Kallgren turned aside all 35 shots he faced to win his first career start.

Kallgren, however, has a 3.97 goals-against average while going 1-2-0 in his last four starts. He exited Tuesday’s game after taking a puck to the mask.

Among the NHL’s top-scoring teams with 268 non-shootout goals, the Maple Leafs have totaled 36 during their current 5-0-1 stretch. They’ve scored at least six goals in five consecutive contests, but saw their five-game winning streak end with Tuesday’s wild 7-6 overtime loss at Florida.

Mitch Marner collected two goals with two assists while William Nylander and John Tavares recorded one of each for Toronto, which surrendered five straight goals. Then needed a late goal to force overtime.

“You don’t want wild swings in a game where we had control,” Toronto forward and former Star Jason Spezza said. “When we have control like that, you want to lock it down.

“You have to learn from it.”

The Maple Leafs, who are trying to hold onto second place in the Atlantic Division, continue to get major contributions from their two superstars.

Marner has at least one point in 11 consecutive contests (eight goals, 18 assists), and a multi-point streak of a franchise high-tying seven straight games.

Auston Matthews, who also has multi-point performances in five of his last six contests, has 17 goals with 10 assists during a 14-game point streak.

With a career-high 54 goals, Matthews remains one away from setting the Maple Leafs’ single-season record.

Marner recorded two assists against the Stars last month, while Matthews sat out as part of his two-game suspension for cross-checking Buffalo Sabres defenseman Rasmus Dahlin.

Meanwhile, teammate Jack Campbell has struggled while posting a 4.50 goal-against average in his last seven appearances.

Dallas’ Jake Oettinger has a 2.44 GAA while winning five of his last seven starts. He stopped 36 of 39 shots in the previous encounter versus Toronto this season.

Stars forward Jason Robertson has recorded just two of his team-leading and career-high 32 goals over his last 12 games.