A’s use long ball to cruise past Rangers 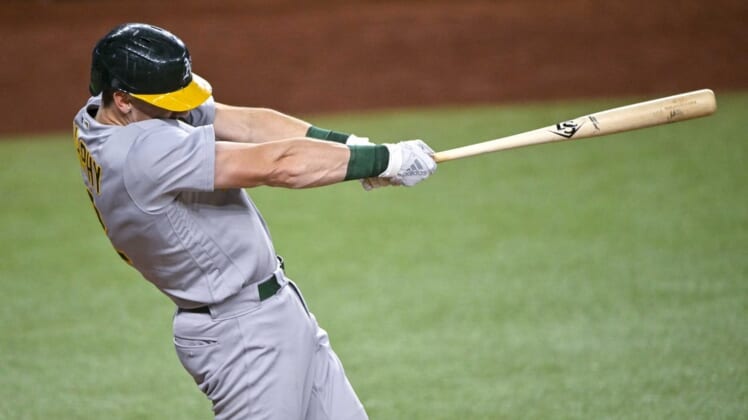 Murphy added a double, drove in three runs and scored three runs. The catcher has gone deep three times in the past two games.

Langeliers, as designated hitter, connected on his first homer, and it came in his second big league game. The shot to right-center highlighted a four-run eighth inning that broke the game open.

The A’s have now won back-to-back games and they have taken two of three in the four-game series that wraps up on Thursday.

For the Rangers, the loss further compounded the frustrations of the franchise.

A’s starter Adam Oller (2-5) worked six innings, giving up one run on five hits. The outing was the right-hander’s second longest start of the season, topped only by a start on July 31 at the Chicago White Sox where he went 6 1/3 innings.

The A’s pulled ahead in the fourth inning. David MacKinnon drew a walk, and Murphy belted his second homer of the night. The two-run drive to right-center put Oakland in front 3-1.

Murphy started off the eighth-inning rally with a double, and he scored on Chad Pinder’s RBI single. Vimael Machin added a run-scoring single, and Langeliers capped the surge with his two-run homer.

Both teams got on the board in the first inning.

With two outs in the top of the first, Murphy went deep to left field.

For the Rangers, Corey Seager singled and scored on Adolis Garcia’s RBI double. In the ninth inning, Mark Mathias had an RBI double to account for Texas’ second run.