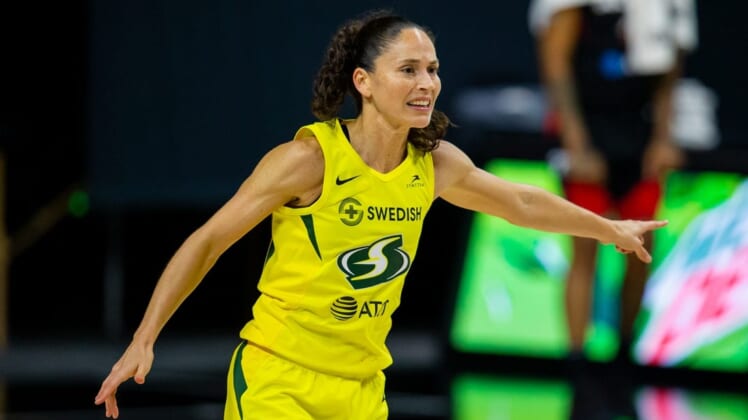 Sue Bird will play her last regular-season home game in Seattle on Sunday afternoon when the Storm host the Las Vegas Aces.

A four-time WNBA champion and 13-time All-Star, Bird has played her entire 19-year WNBA career with Seattle. She previously announced that she will retire at the end of the season.

The game is a sellout, with the uppermost part of the Climate Pledge Arena being opened up for the day. The arena will hold 18,100 fans instead of its typical 13,500. ABC will televise the game, and the Storm will honor the WNBA icon before the tipoff.

“I’m looking forward to it. That’s for sure,” Bird, 41, told reporters Saturday. “I know it’s going to be a really special day. Am I ready for it? I guess we’ll see. It’s gonna be a lot, in all the good ways.”

Bird is scheduled to address the crowd after the game. The consummate pro, she undoubtedly will be all business for the Storm (20-12), who have won three of their past five games heading into the home finale. They will finish the season on a three-game road trip, with the final stop in Las Vegas (22-10) on Aug. 14.

Former WNBA MVP Breanna Stewart erupted for a season-high 33 points in Seattle’s 89-77 victory over the Minnesota Lynx on Wednesday. Stewart drained four 3-pointers and Bird added three for the Storm, who shot 50 percent from the floor and 44 percent from beyond the arc en route to recording their sixth straight home win.

“When we’re enjoying our moments and playing at a high level, it’s very fun basketball to watch and be a part of,” Seattle coach Noelle Quinn said. “That’s who we’ve been historically. For this franchise, this organization and this team that’s moving the ball … (and) free flowing. I thought they showed that (on Wednesday).”

The Storm reside in fourth place in the WNBA standings, a half-game up on the Washington Mystics.

The Aces, in turn, will aim to avert a season-high three-game losing skid on Sunday when they conclude their five-game road trip.

Las Vegas had won seven of eight games before dropping an 83-73 decision to the Mystics on Tuesday and an 82-80 setback to the Dallas Wings two nights later. The Aces are tied with the Connecticut Sun for second place in the standings, two games behind the Chicago Sky.

Chelsea Gray scored 20 points against Washington and posted season-high totals in points (28) and 3-pointers (five) versus Dallas. She is 19-for-30 from the floor and 7-for-12 from 3-point range over the past two games.

“For a while there, she was the only thing we had going offensively,” Aces coach Becky Hammon said, per the Las Vegas Review-Journal.