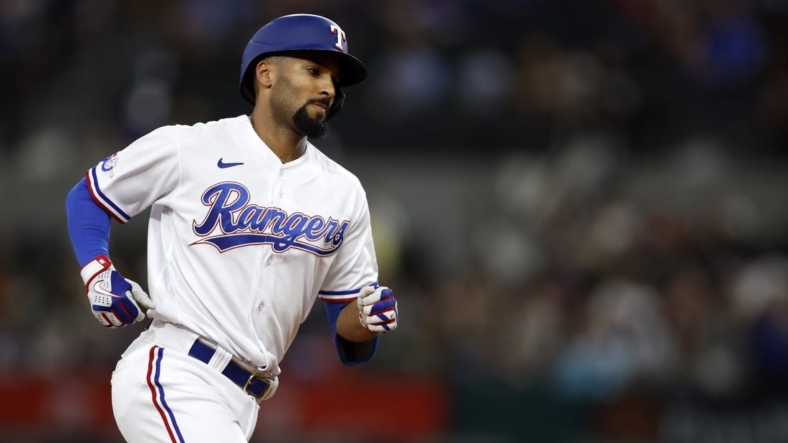 With Oakland down to its final out, Vimael Machin ripped a game-tying RBI double and Stephen Vogt reached on an error that brought home the decisive run as the Athletics rallied to beat the Texas Rangers 8-7 on Wednesday in Arlington, Texas.

Tyler Cyr (1-0) got his first major league win after throwing 1 2/3 scoreless innings. Domingo Acevedo entered to record the final out and earn his first career save.

In the ninth inning, Oakland’s Sean Murphy hit a leadoff single against Jose Leclerc (0-3). With two outs, Machin tied it with an RBI double to deep right field.

Vogt pinch-hit and tapped a grounder up the middle that deflected off shortstop Corey Seager’s glove, allowing Machin to race home from second.

Dermis Garcia, Seth Brown and Tony Kemp homered for the A’s, who posted just their third win in 13 games.

Mark Mathias, Marcus Semien and Jonah Heim went deep for the Rangers, who are in a 4-14 skid.

Garcia led off the second inning with a home run to left field off Dane Dunning, giving the A’s the early lead. It was his second homer in two days.

The Rangers responded in their half of the second with four runs, on homers by Mathias and Semien off JP Sears.

For Mathias, it was his third straight plate appearance with a home run. In Texas’ 8-7 win on Tuesday, Mathias tied the score with a home run in the seventh inning, and he belted a walk-off shot in the ninth.

Also in the second on Wednesday, Semien socked a three-run homer.

In the third inning, Mathias’ single to center scored Nathaniel Lowe, who doubled.

Oakland capitalized on a two-out walk by Murphy in the fifth inning, as Brown followed with a two-run homer. Machin added an RBI double to cap a three-run inning, pulling the A’s within 5-4.

Texas responded in the bottom of the fifth. Adolis Garcia tripled to lead off the inning off reliever Collin Wiles, and with two outs, Heim connected on a two-run homer.

Kemp made it a one-run game with a two-run homer off Dennis Santana in the sixth inning.