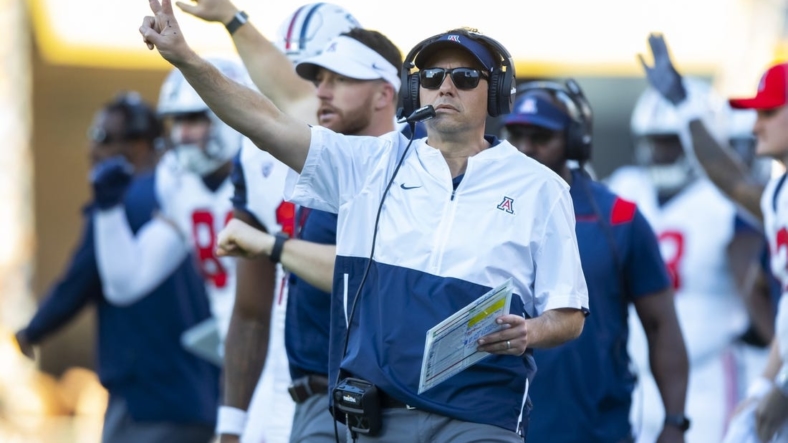 San Diego State will debut a new quarterback and open its on-campus stadium when it begins the season Saturday against visiting Arizona.

The Aztecs, coming off a 12-2 season built on a stingy defense and solid running game, should have another shut-down unit, led by All-America-caliber safety Patrick McMorris. The big question is what a revamped offense looks like under the direction of quarterback Braxton Burmeister, who is coming home for his final year of eligibility.

Burmeister, who twice committed to Arizona while in high school, instead signed with Oregon before playing the past two seasons at Virginia Tech, where he passed for 2,647 yards.

“Just to be back home and see the fans here and the atmosphere … this is a beautiful stadium that we have,” said Aztecs wide receiver Jesse Matthews. “It’s really exciting.”

The Mountain West’s Aztecs, a potential target of the Pac-12 amid conference realignment, went 2-0 against the Pac-12 last season, including a 38-14 win over Arizona and an overtime victory over league champion Utah. San Diego State held the Wildcats to 230 yards last season, but second-year Arizona coach Jedd Fisch made big offseason upgrades to his offense, especially at quarterback and wide receiver.

Jayden de Laura, the Pac-12 Offensive Freshman Player of the Year while at Washington State last season, takes over at quarterback. He completed 227 of 359 passes for 2,798 yards, with 23 touchdowns and nine interceptions in 2021.

“The quarterback position being secure adds a confidence among the locker room because you know who is taking those snaps, you know what he can do, you know what you want him to do,” Fisch said. “We feel very confident in Jayden.”

The addition of de Laura and big-play receivers — including UTEP transfer Jacob Cowing and 6-foot-5 four-star recruit Tetairoa McMillan — offers hope that the Wildcats can turn close losses into narrow wins. They were within one score of BYU, Oregon, UCLA, Washington, USC and Utah in the fourth quarter last season but often faded late.