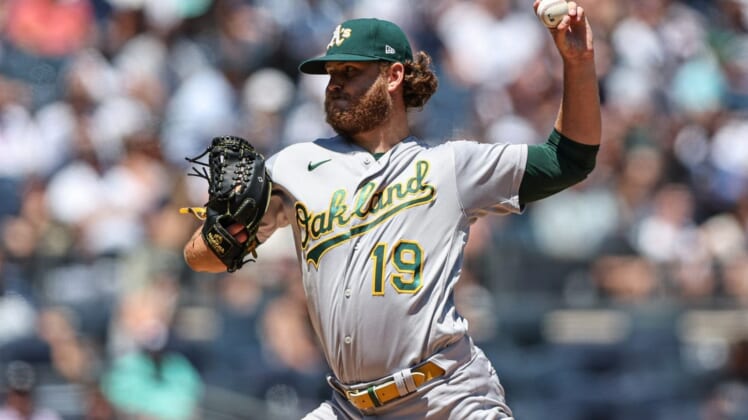 The Oakland Athletics return home, but get no break in the schedule, when they open a three-game series against the Toronto Blue Jays in an Independence Day twilight start Monday night.

The A’s have lost 11 of their last 12 games in Oakland, and potentially already suffered their first loss of the upcoming homestand before it started.

Ace right-hander Frankie Montas had to be pulled from Sunday’s 2-1 loss in Seattle after one inning with tightness behind his right shoulder. A’s manager Mark Kotsay reported after the game that Montas would undergo further examination in Oakland.

To add insult to injury, the A’s had to run through three relievers for a total of seven innings Sunday on the eve of a visit from Blue Jays, one of the best hitting teams in the American League.

Kotsay praised his relievers, especially Austin Pruitt, for their emergency effort that went for naught when the Mariners recorded a second straight 2-1 win.

“Big-league performance by Pruitt. That’s awesome,” Kotsay said of the 4 1/3 innings in which the righty allowed just one run and two hits. “He gave us a chance to stay in the game.”

Oakland nonetheless ended the road trip at 3-7 trip, and now finds itself up against a Toronto team that took two of three in a home series against the A’s in April.

Blue Jays right-hander Alek Manoah (9-2, 2.09) pitched a 4-3 win over the A’s in the series finale, limiting them to two runs and four hits in six innings. Stephen Vogt homered off Manoah, one of just seven he has allowed this season.

He is coming off a no-decision in a 6-5 home loss to the Boston Red Sox last Wednesday, having allowed three runs (two earned) in seven innings. He’s 4-1 with a 1.94 ERA in seven road starts this season.

Like his A’s counterpart, Blue Jays manager Charlie Montoyo came away from a tough homestand concerned about the overuse of his bullpen. The club recently signed former A’s reliever Sergio Romo to provide depth, and he’s given the bullpen an immediate lift with two shutout innings.

“Everybody has pitched a lot. We’ve got to regroup,” Montoyo said after the Blue Jays dropped a third straight to the Tampa Bay Rays on Sunday. “That’s baseball, and that’s the spirit we have. We’re going to regroup, and we’re going to be OK.”

The A’s are scheduled to open the homestand with lefty Cole Irvin (2-6, 3.58) on the hill. He did not face Toronto in the earlier series.

Irvin is winless in his last nine starts, going 0-5 despite a respectable 3.69 ERA. He hasn’t won since shutting out the Texas Rangers 2-0 in his fourth start of the season in April.

The 28-year-old has gone 1-1 with a 6.97 ERA in two career starts against the Blue Jays. The only time he’s faced them in Oakland, he struck out nine while allowing just one run and three hits in eight innings in a 4-1 win last May.

Alejandro Kirk had a three-run homer in an 8-0 home win over Irvin and the A’s in a rematch at home in September.

The Oakland visit means a homecoming for five-year A’s standout Matt Chapman, who was dealt to the Blue Jays in March.

Chapman is hitting .215 this season after struggling to a career-low .210 for the A’s last year.