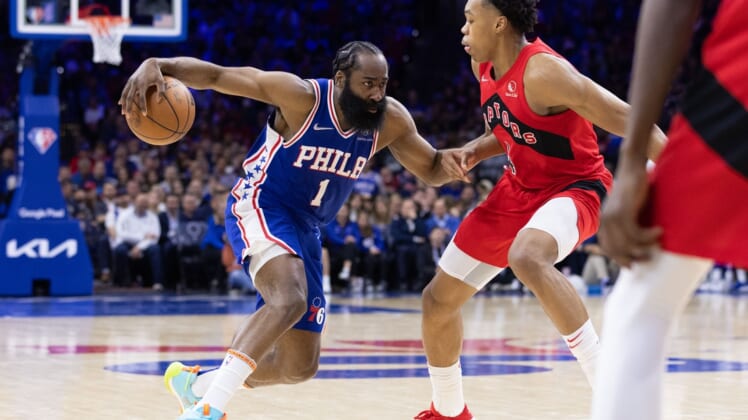 The Toronto Raptors will try to take another step toward making history Thursday night when they play the visiting Philadelphia 76ers in Game 6 of an Eastern Conference first-round playoff series.

The Raptors posted a 103-88 win in Game 5 without Fred VanVleet (strained hip), overcoming his 20.3 points per game from the regular season with a strong defensive effort. He is listed as doubtful for Game 6.

Even with the Raptors missing a key player, the momentum shift in the series is palpable.

“Maybe there is, but it doesn’t really matter,” Raptors coach Nick Nurse said. “Ball goes up on Thursday, everybody’s gotta play like heck.”

Pascal Siakam led Toronto scorers with 23 points and 10 rebounds, while four others reached double figures in points during Game 5.

“They’re doing a really good job of just finding some things offensively,” Nurse said. “I think they feel really good down there. We’re generating, for the most part, really good shots and they should feel good about that. They’re just moving the pieces around and we’ve got a few principles we want to follow and they’re doing a good job of it.”

Joel Embiid, playing with a torn ligament in his right thumb, led Philadelphia with 20 points and 11 rebounds.

“I mean, it’s the same recipe,” Embiid said. “Don’t turn the ball over, offensive rebounding. We definitely have to be better defensively, more connected defensively. I feel like there were a few plays (Monday) where we were not on point and we didn’t have each other’s backs. But we’re fine. There’s a reason why we won three games in a row.”

Toronto’s Precious Achiuwa, who scored 17 points in Game 5, has played an important role in limiting Embiid.

“I understand my assignment, so I just go out there and try to do it to the best of my ability,” Achiuwa said. “Try to switch ball screens, stay on (Embiid) to disrupt the flow of his offense. Try to make him work, run. Space out the floor, hit wide-open jumpers, take him off the dribble, whatever I get on that side.”

Nurse has been impressed with his backup forward.

“He feels like a more confident, different player to me,” Nurse said of Achiuwa.

James Harden and Tyrese Maxey have struggled offensively for the 76ers.

“We have long, athletic guys, skilled, and we just tried to take advantage of every mismatch that we had,” Achiuwa said.

“We have to get James going downhill in some more actions that he likes and is more comfortable,” 76ers coach Doc Rivers said. “You know, I just keep saying with Tyrese, we just have to get the ball in his hands more. We just do. I said it all game. He’s just not getting the ball in transition enough. And that’s on us.”

“I just thought that they were the tougher team all night,” Rivers said. “They were more physical all night. I thought they attacked us, we didn’t attack back, we didn’t get in the paint enough.”