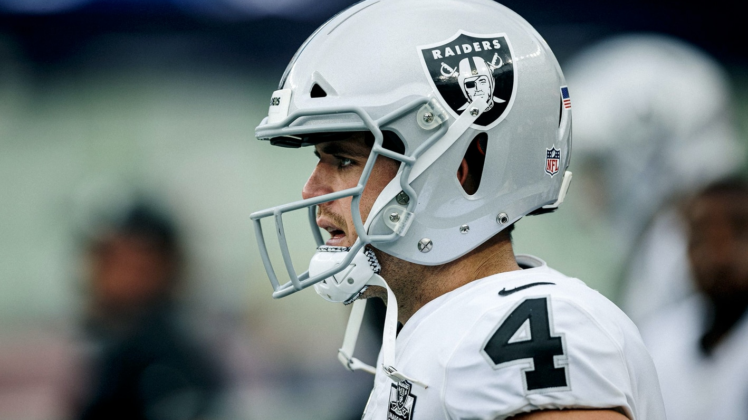 The NFL is a quarterback-driven league and the Las Vegas Raiders injuries mean the spotlight again shines on Derek Carr to lead his team through challenges.

If Derek Carr wants to quiet his critics, stay out of the trade rumor mill during the offseason, and earn more recognition as the Las Vegas Raiders franchise quarterback, he must play well in the most inconvenient situations. That includes the current rash of Raiders injuries heading into a big game against the 3-0 Buffalo Bills.

According to NFL Network’s Ian Rapoport, the Raiders have ruled out Bryan Edwards for Sunday’s game against the Buffalo Bills, and fellow rookie wideout Henry Ruggs III is a “long-shot” to play:

Carr Understands There Are No Excuses

In the NFL, every team deals with injuries. Derek Carr knows this, and when asked about the Raiders missing parts, the seventh-year veteran compared his thoughts about key roster losses from years ago to now.

“Nobody cares about the injuries,” Carr said during Wednesday’s presser about the Raiders injuries heading into Week 4. “They just see the loss…I have been a victim of this in my career, saying in my head, ‘man, we’re missing that and that. Goodness if we had that.’ At the end of the day who cares? We can’t worry about that.”

No one will feel pity for a shorthanded squad or use injuries as a reason to perform at a suboptimal level. Carr realizes he plays in a no-excuses league. The Raiders need a performance similar to his Week 2 outing against the New Orleans Saints. Carr threw for 284 yards, three touchdowns and zero interceptions.

Before you give Derek Carr a pass with possibly two wide receivers out, remember he had an impressive performance against the Saints with Ruggs and Edwards, combining for just three catches and 46 yards.

Yes, Ruggs’ presence opens up routes for teammates in other areas and Edwards secured receptions for 20 and 22 yards in that game. Yet the Raiders have experienced veterans in Nelson Agholor and Zay Jones to step into bigger roles.

Jones played 36 games with the Bills and knows offensive coordinator Brian Daboll’s offense. He’s also familiar with quarterback Josh Allen, a former teammate. Agholor doesn’t have Ruggs-like speed, but he can make up for that in experience and veteran savvy. Last week, the sixth-year pro caught two early passes in the first quarter before the offense stumbled and faded for a majority of the game.

Carr Must Work With Available Weapons

Derek Carr has his primary pass-catching option in tight end Darren Waller. Hunter Renfrow, who caught a pinpoint pass before halftime last week, ranks second on the team in receptions (11) and yards (142). Running back Josh Jacobs has caught at least three passes in each game for a total of 75 yards.

So despite the injury woes, Carr has enough weapons to move the ball on the Bills pass defense, which ranks 27th in yards allowed. Buffalo’s aerial defense isn’t the same stingy unit that ranked fourth in yards allowed and gave up the second-fewest touchdowns in 2019. If the Raiders offense establishes its rhythm early, we could see a scoring shootout at Allegiant Stadium Sunday.

During Wednesday’s media presser, head coach Jon Gruden said Nick Kwiatkoski (pectoral) returned to the practice field. Yet, he’s not a lock to play, and the Raiders run defense has allowed 112-plus-yards in all three games. According to Rapoport, rookie cornerback Damon Arnette will see a thumb specialist and could eventually go on injured reserve.

With key absences within the Raiders 25th-ranked scoring defense, Carr may have to show he’s able to beat a playoff-caliber opponent (at full strength) without a complementary unit on the side of the ball. Not ideal, but that’s what it’ll likely take for the Raiders to avoid consecutive losses. Buffalo ranks fourth in scoring. Allen has already thrown for 1,038 passing yards, 10 touchdowns, and just one interception. The Raiders injuries on defense hurt, but the unit itself has a long way to go even at full strength.

Of course, Gruden will run Jacobs as part of the offensive game plan, but what if he doesn’t have the same success as the Los Angeles Rams who ran for 167 yards on the Bills last week? Offensive guard Richie Incognito (Achilles) is on injured reserve for at least another two weeks and right tackle Trent Brown (calf) has missed two months now (sans three snaps in Week 1) and hasn’t returned to practice yet. Backup offensive linemen will need to make a push upfront.

As Carr said Wednesday, the Raiders must adopt the next-man-up mentality, which is a cliché sports term, but the organization and its fans cannot wait for the perfect situation to fully assess its quarterback who’s been the subject of outside scrutiny and trade rumors over the last two years.

If the Raiders want to compete with the Kansas City Chiefs within the division or make a run at a playoff spot, they have to at least show they’re capable of overcoming adversity against stiff competition. The NFL isn’t the place to look for comfort zones – it pushes your limits.

Now in his third year under Gruden, Derek Carr should be able to elevate decent veteran talent around him. That means Agholor and Jones, former first- and second-round picks, respectively, have to make some type of impact. He has to get the ball to key playmakers, Waller, Jacobs and Renfrow.

What Are the Expectations for Carr and the Offense?

Carr has to take advantage of a vulnerable pass defense that’s allowed 321 and 328 yards to the Rams and Miami Dolphins, respectively, over the last two weeks.

How does a Grade A-type game for Carr look on paper?

Ideally, he’d complete passes to eight or more different pass-catchers at a high completion rate, not turn the ball over, use his legs when necessary and deliver accurate throws on third downs.

Because of Carr’s high accuracy and depth within the pass-catching group, the Raiders offense shouldn’t fall apart with a couple of rookie injuries at wide receiver. A playoff-caliber squad can beat its opponent in multiple ways. If the Silver and Black has postseason aspirations, now is the time to make another statement against an undefeated squad rolling into their building.