A’s look to power on against White Sox 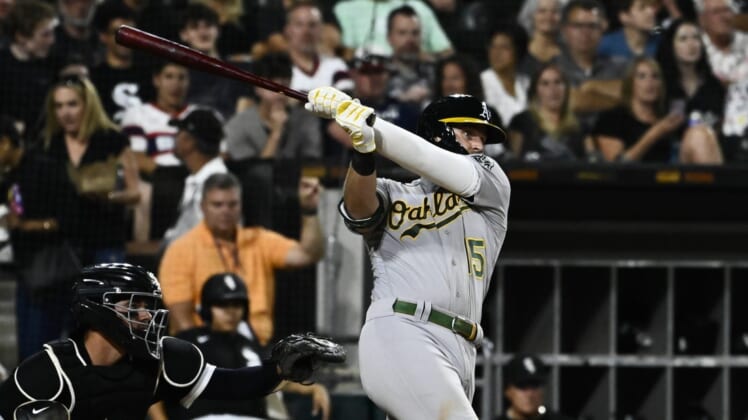 After smacking four home runs Friday en route to a 7-3 road victory against the Chicago White Sox in the opener of a three-game series, the surging Oakland A’s will look to keep connecting on Saturday.

Oakland has won a season-best four straight and seven of nine since the All-Star break, thanks in great part to a horde of homers.

The A’s have slugged 33 of their 87 home runs this season in July, helping them to a 14-10 mark that guarantees the club its first winning month of 2022.

Back from the paternity list, Oakland’s Seth Brown hit two of the team’s home runs Friday, solo shots in the sixth and eighth innings.

Brown had a one-track mind on both trips around the bases.

“As I was running I just knew my wife was holding my son,” Brown said. “So I think that’s what I’ll remember most, is just picturing my wife holding my son.”

Chicago couldn’t quite match Oakland’s prowess. The White Sox drew to within 5-3 on Josh Harrison’s two-run home run in the seventh inning but otherwise were unable to maintain the early momentum from Jose Abreu’s RBI single in the first inning that gave them a 1-0 lead.

Aiming to get into a groove as they push for a third successive playoff berth, the White Sox again dipped below .500. Chicago lost for the second straight time Friday following a three-game winning streak that came on the heels of another two-game skid.

The White Sox succumbed to their frustrations in the seventh, as leadoff hitter Tim Anderson and manager Tony La Russa were ejected for arguing a called third strike.

Harrison couldn’t deny that the team is pressing.

“When you look at the game of baseball, 162 games, we haven’t played our best baseball,” he said. “But sometimes we are going up there feeling like we have to be the guy to change it. You have to show up every day and rely on the next man. That has nothing to do with chemistry.

“That’s the game of baseball weighing down on you and us putting more pressure on ourselves instead of going and playing the game we love and know how to play.”

Chicago had three doubles among its six hits but figures to get extra oomph in the lineup as the series continues. After resting Andrew Vaughn on Friday, La Russa said Vaughn would play Saturday and Sunday.

Blackburn is 1-4 with an 8.23 ERA over his past seven starts. He has scuffled against the White Sox in a limited career sample, losing both starts while pitching to a 7.84 ERA.

Cueto has pitched to a 2.00 ERA over four starts this month and is coming off Saturday’s no-decision against Cleveland, when he scattered four runs (three earned) and eight hits in seven innings.