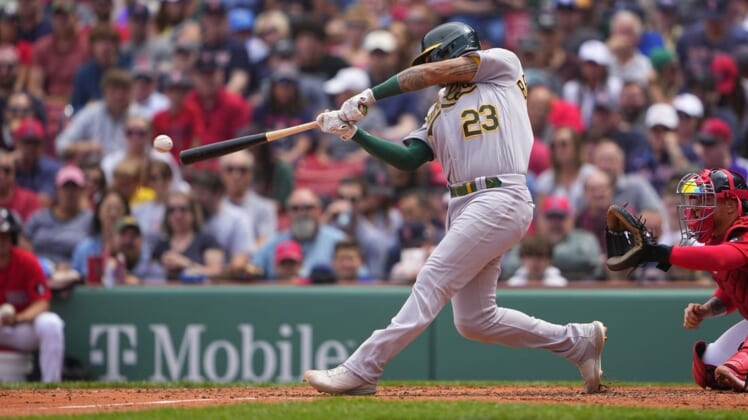 The visiting Oakland Athletics salvaged the finale of a three-game set in Boston as they scored three times in the third inning on the way to a 4-3 win over the Red Sox on Thursday afternoon.

Ramon Laureano went 2-for-4 with a run to lead the A’s, who were outhit 11-8 but managed to win their first game in six tries against Boston this season. Christian Bethancourt added a two-run single.

Paul Blackburn (6-2) earned the win for Oakland, tossing 5 1/3 innings of one-run ball with four strikeouts. He scattered eight hits in the start.

J.D. Martinez went 3-for-5 and drove in a run to pace the Red Sox, while Jarren Duran and Jackie Bradley Jr. had two hits apiece.

A pair of third-inning hits against Boston starter Rich Hill helped the A’s take their first lead of the three-game series. Cristian Pache’s one-out double to center set up the offense before Chad Pinder grounded a single to plate the first Oakland run.

Laureano followed with a double to right. Laureano and Pinder scored on Bethancourt’s two-run single to left, giving the A’s a 3-0 lead.

Boston had two baserunners in each of the first three innings, but it only led to one run on a Xander Bogaerts RBI groundout in the third. Rafael Devers led off with a walk and Martinez singled to right. A fielding error allowed both runners to reach scoring position before the first out was recorded.

The visitors extended their lead to 4-1 in the sixth. Seth Brown singled with two out, reached second on a passed ball and scored on Devers’ fielding error on a hard-hit ball inside the third-base line.

Boston got right back in the game with two runs in the eighth.

Jimenez recorded a four-out save, his 11th of the season.