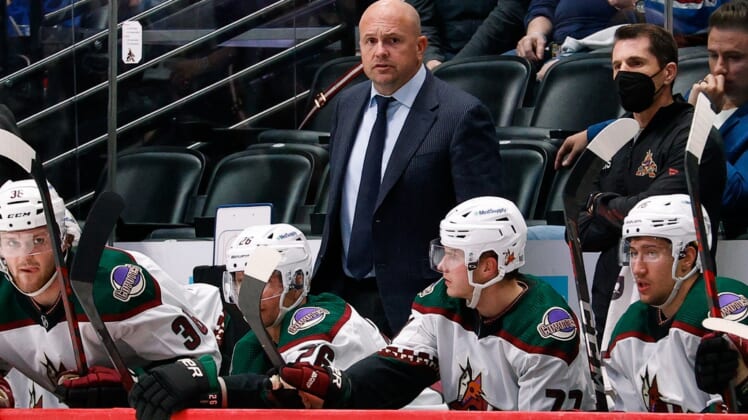 The Arizona Coyotes will need to piece together a lineup when they face the Anaheim Ducks on Friday night in Glendale, Ariz.

Clayton Keller was the latest player to go down for the Coyotes.

Keller, who leads Arizona in goals (28) and assists (35), sustained a broken femur when he slid into the end boards during a 5-2 win against the visiting San Jose Sharks on Wednesday. He will be sidelined four to six months after having surgery.

“We know it will be long-term, but he will recover,” Coyotes coach Andre Tourigny said. “You could see the guys were in shock. They were lining up at the (medical area) just to touch him, just to tell him, ‘We’re there for you.'”

Lawson Crouse fractured a bone in his hand when he was hit with a shot in a 6-1 road loss to the Edmonton Oilers on Monday. He will be out approximately four weeks. Crouse is tied for second on the team with 20 goals.

Christian Fischer, another forward, has been out since March 22 with a lower-body injury and won’t be back for three or four weeks.

The growing injury list has created chances for other players.

Jan Jenik was recalled from Tucson of the American Hockey League on Monday and scored two goals in the win against the Sharks. It was his seventh NHL game.

Other young forwards such as Matias Maccelli and Michael Carcone are still looking for breakthrough games since their recalls last month.

The win against San Jose on Wednesday ended a six-game losing streak (0-5-1) for the Coyotes.

The Ducks are desperate for a win after losing their 11th straight game (0-8-3) on Thursday night, 3-2 in overtime against the visiting Dallas Stars.

“We just erase this one out of our memory,” Ducks defenseman Kevin Shattenkirk said after scoring one of the team’s two goals. “There’s definitely some good we can take from it, some lessons learned.”

Anaheim has been far from 100 percent. Ryan Getzlaf was a late scratch Thursday due to a lower-body injury, just as Adam Henrique returned from a two-game absence caused by an upper-body injury.

Anthony Stolarz likely will start in goal after John Gibson made 32 saves in the overtime loss to the Stars. Stolarz hasn’t appeared in a game since March 12, part of the Ducks’ previous back-to-back set. He also was unavailable for nearly a week because of an illness.

In the other meeting against Arizona this season, Keller scored two goals, including the overtime winner, in the Coyotes’ 6-5 road victory on Dec. 17.

Shattenkirk said the Ducks won’t be feeling sorry for the ailing Coyotes.

“Arizona’s been playing some pretty good hockey as of late,” he said. “They’re certainly a team that’s trying to win games, so we can’t take them lightly.”