A’s don’t make an out in 10th, clip Mariners 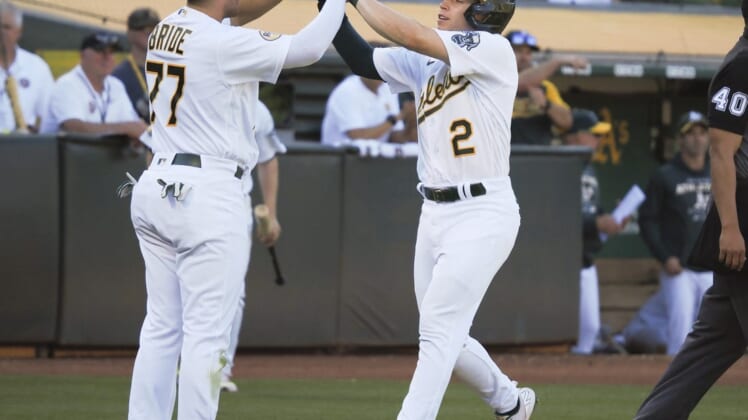 Automatic runner Tony Kemp raced home from third base on Sheldon Neuse’s chopper back to the mound with no outs in the 10th inning Saturday afternoon, giving the Oakland Athletics a 4-3 walk-off victory over the visiting Seattle Mariners.

After Dany Jimenez (3-4) had held the Mariners scoreless in the top of the 10th, Seattle chose to intentionally walk Seth Brown to put runners at first and second with no outs in the bottom of the inning.

Sean Murphy then drew an unintentional free pass from Diego Castillo (7-2), loading the bases for Neuse, whose one-hopper to the right of the mound hung in the air long enough to force the pitcher into bobbling the ball in his haste to make a play at the plate.

Neuse was credited with an RBI, giving the A’s just their third walk-off win of the season.

Seeking a fifth straight win, the Mariners rallied into the 3-3 tie on Eugenio Suarez’s two-out, RBI single in the eighth off the A’s fourth pitcher, Zach Jackson. The hit scored Mitch Haniger, who had reached on a one-out single.

Seattle got sacrifice flies from Ty France in the first inning and Adam Frazier in the fourth to go up 2-0. Both times, the flyball followed a triple — by Julio Rodriguez to lead off the game and by Suarez with one out in the fourth.

The A’s did all their regulation scoring in the fifth with the help of an inning-opening error on second baseman Frazier and a flyball lost in the sun by right fielder Jake Lamb. Nick Allen was credited with an RBI single on the ball lost by Lamb, scoring Vimael Machin, before Kemp put the hosts on top 3-2 with a two-run single.

Kemp finished with two hits and two RBIs, while Cal Stevenson also had two hits for the A’s, who improved to 2-3 in extra innings.

Rodriguez collected a triple and two singles for the Mariners, who fell to 7-5 in extra-inning games. The walk-off loss was their third of the season.

Suarez had a triple and a single for Seattle, which was outhit 8-7.