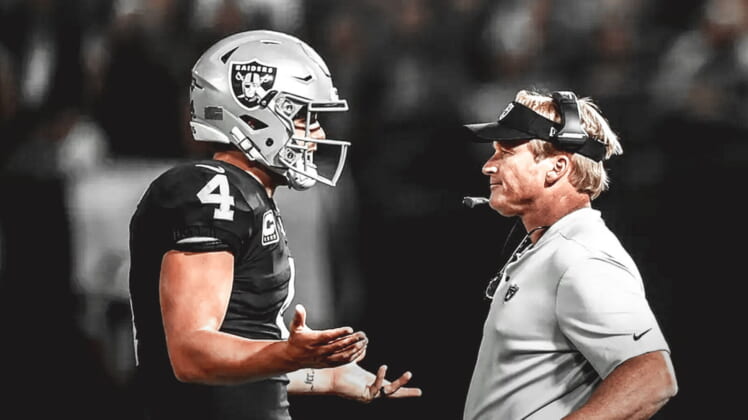 While many are focused on the future of Raiders quarterback Derek Carr, his coach Jon Gruden’s ability to adjust deserves inspection.

The Oakland Raiders loss to the Tennessee Titans put a dent in their playoff hopes. The Silver and Black’s 20-16 defeat to the Jacksonville Jaguars in the club’s home finale had to feel like a gut punch to players and supporters in attendance.

The body blows kept coming after the final whistle.

Quarterback Derek Carr went over to the Black Hole to pay his respects, and he was met with loud boos, which followed him all the way through the tunnel.

As of late, his subpar performances and inconsistencies have become a steamy topic of discussion as fans question whether he’s the quarterback to lead this team into Las Vegas.

Radio.com Sports insider Michael Lombardi, in his latest The Athletic column, delivered another body blow from a perspective of someone who’s worked with head coach Jon Gruden in the past. He cited a “disconnect” between Carr and his head coach, going into specific details.

“…having been around Gruden for many of those good years in Oakland, I know what he loves in quarterbacks: the toughness, the grit, the willingness to sacrifice, and most of a competitive drive to match his own. Carr makes too many mistakes with the ball, and whether it’s a fair assessment of his ability or not, he never displays the fire that would remind anyone of former quarterback Rich Gannon.”

We’ll hear more on the subject from Lombardi as he’ll join the Silver and Black Today on CBS Sports Radio 1140 in Las Vegas this Sunday to talk Derek Carr, Jon Gruden and more. I’ll also be on the show live to discuss the subject.

In 1998, the late Al Davis hired Lombardi for a senior personnel executive position. Gruden started his first head-coaching stint in the same year. They worked together until Davis traded Gruden to the Tampa Bay Buccaneers in 2002. Lombardi held on to his title until 2007.

So, when Michael Lombardi speaks about Gruden’s preferences, his words hold weight.

People change or tweak their likes and dislikes over time. So, Gruden’s current preferable quarterback traits don’t necessarily have to match up with his thoughts from decades ago, but Lombardi may be speaking with up-to-date inside knowledge.

In the bigger picture, we do know something isn’t clicking with the Raiders offense—specifically in the second half.

In Week 11, the Raiders defeated the Cincinnati Bengals, improving to 6-4 with their eyes on a playoff race. In any setting, winning is the best cover for fatal flaws. Throughout the year, Oakland struggled in the second half, especially in the third quarter. Now, at 6-8, the team’s offensive warts have popped up on the surface like a cluster of pimples on a high-schooler’s face.

Following the loss to Tennessee, Gruden briefly spoke about the Raiders’ poor production coming out of halftime.

Now, at 6-8, the team’s offensive warts have popped up on the surface like a cluster of pimples on a high-schooler’s face.

Let’s do a deep dive into the average scoring numbers between halves for the season, per Team Rankings.

Josh Dubow of The Associated Press added context to the Raiders’ third-quarter performances.

In summary, the Raiders start games with a top-10 offense that’s capable of competing against most teams in the league. After 30 minutes, with the same personnel, we’re looking at an offense that’s just as effective as a JaMarcus Russell-led unit.

What changes between the first and second halves? In Gruden’s own admission, not enough for the Raiders.

The Raiders don’t have an offense with enough talent to run the same plays repeatedly and win every snap. Gruden has to tap into his creativity with a group that lacks top-flight wide receiver talent.

Typically, when teams go into the locker room for halftime, the coaches make adjustments to counter the opponent’s first-half execution. If an offense doesn’t make a few changes to keep a reeling defense on its heels, the scheme becomes stale. You can compare a game plan to an organic fruit. When left out too long, it starts to deteriorate.

Of course, players have to do their jobs, but it’s on the play-caller to put his group in position to take advantage of mismatches and create new pathways to the end zone.

The Raiders don’t have an offense with enough talent to run the same plays repeatedly and win every snap. Gruden has to tap into his creativity with a group that lacks top-flight wide receiver talent.

Gruden and Carr Headed for a Breakup?

Countless times, Gruden stood in front of the media and accepted fault for the Raiders’ shortcomings. He’s also (fairly) pointed to moments when Carr could’ve made better decisions with the football.

Following Oakland’s Week 13 loss to the Kansas City Chiefs, Gruden said he felt Carr “could’ve got off Tyrell and gone someplace else…” on the second interception. The Raiders lead skipper also criticized his quarterback a day after their disappointing loss to the Jaguars.

When it comes to quarterback, they have to make an honest assessment. Is No. 4 the guy? If not, who’s the next man up?

“Derek got aggressive a couple of times,” Gruden said. “Got to check the ball down underneath, I think (that) would have helped us on one of the drives.

As the 2019 campaign winds down and mock draft season heats up, we’re going to see plenty of predictors slot a quarterback to the Raiders, who currently hold the Nos. 13 and 18 spots.

In the NFL, someone has to take the fall for a team’s poor performances at the end of the season. The decision-makers must look at improvements or changes.

While Gruden says mostly good things about Carr, we know he and general manager Mike Mayock will evaluate every position. When it comes to quarterback, they have to make an honest assessment. Is No. 4 the guy? If not, who’s the next man up?

Raiders fans should ponder a broader concern for the offense with the team’s recent second-half performances and Gruden’s history. It’s fair to question the 56-year-old’s ability to adjust—not only to the competition between halves—but also to his personnel.

During Gruden’s first stint in Oakland, he had two Hall of Fame wide receivers in Jerry Rice and Tim Brown, but he’s now required to coach up a young rebuilding squad.

After Gannon, which quarterback experienced significant development or saw their career take off under Gruden? That’s a tough question to answer. Although he won a Super Bowl in Tampa Bay, his offenses never ranked higher than 18th in scoring through seven seasons (2002-08).

Whether it’s Carr or someone new under center next season, Gruden has to be flexible with his scheme to aid player development and accentuate their strengths, avoiding rigidity in an ever-evolving league. A square peg will never fit in around hole—not in Oakland nor in Vegas.