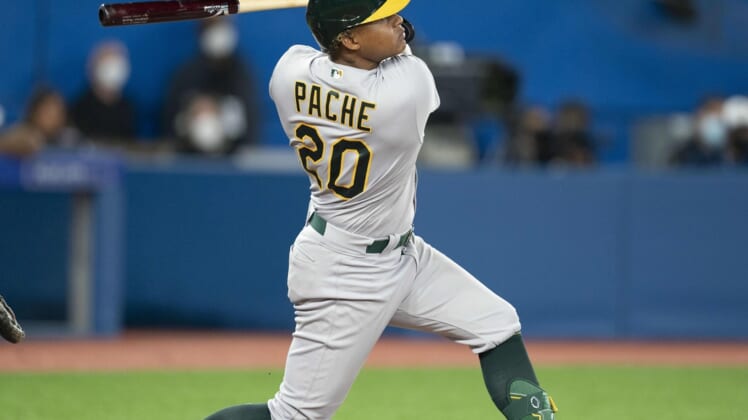 The Oakland Athletics will be out to complete their season-opening 10-game road trip with a winning record Sunday afternoon in the rubber match of a three-game series with the Toronto Blue Jays.

Cristian Pache’s two-run home run in the ninth inning gave the Athletics a 7-5 victory over the Blue Jays on Saturday. The teams have split the first two contests of the three-game series, leaving each with a 5-4 record.

Pache was obtained in a trade last month in the deal that sent Matt Olson to the Atlanta Braves.

The center fielder brings energy and solid defense to the Athletics.

“It’s important to have joy on the team,” Pache said this week when Oakland took three of four games from the Tampa Bay Rays in St. Petersburg, Fla.

“The game is won from the dugout. We’re united at all times supporting each other. Thanks to God, we’re a team with a lot of soul and always give the best of ourselves on the field so our fans can enjoy it.”

Pache hit his first home run of the season – and the second of his career – against Julian Merryweather following a one-out single by Christian Bethancourt.

“It was incredible,” Pache said through a translator. “I’m very grateful, and I’m really happy to see that I have that strength to be able to hit a ball like that. My confidence just continues to grow.”

“He’s been impressive ever since he’s been here with him in the outfield, his arm, the at-bats he puts together,” said Athletics starter Paul Blackburn, who allowed two runs in five innings.

The Athletics will face a difficult task on Sunday when they send out right-hander Adam Oller (0-0, 33.75) against Toronto right-hander Alek Manoah (1-0, 0.00).

Oller made his major-league debut on Tuesday and did not factor in the decision in Oakland’s 9-8 loss to Tampa Bay. He allowed five runs, five hits and three walks in 1 1/3 innings in his start.

Manoah’s first start of the season was impressive. He held the host New York Yankees to one hit and four walks while striking out seven in six scoreless innings.

He has faced Oakland once, allowing six runs, five hits and three walks in five innings on Sept. 3. He did not factor in the decision in the game won by the Blue Jays, 11-10.

Blue Jays manager Charlie Montoyo was ejected by home plate umpire Jeff Nelson in the bottom of the eighth inning Saturday after Lourdes Gurriel Jr. was called out on strikes. The strike zone had been frustrating both teams.

“You have to give our guys credit,” Montoyo said. “I was watching the game and I felt I had to protect my players. And that’s what it was. Give our hitters credit for not arguing.”

The Blue Jays overcame a 5-1 deficit, tying the game in a three-run sixth inning when former Athletics third baseman Matt Chapman hit a two-run homer followed by a solo shot from Zack Collins.