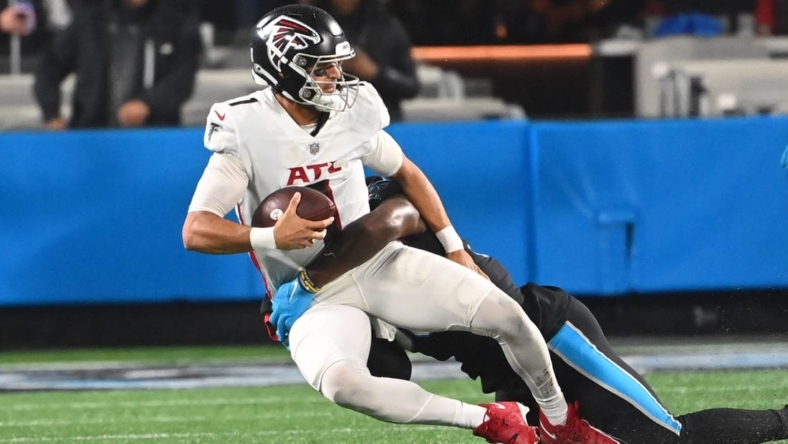 Despite some dreary passing numbers and a combined 32 points scored over the two losses, Smith was adamant that Marcus Mariota is the team’s starting quarterback.

“There is no situation,” Smith said. “There never was a situation. Ever.”

In fact, the second-year coach is optimistic about where his Falcons (4-6) stand entering Sunday’s matchup with the Chicago Bears (3-7).

For the season, Mariota has completed 143 of 231 passes for 1,747 yards, 12 touchdowns and seven interceptions. He’s the team’s third-leading rusher (347 yards, three touchdowns) and has done what Smith has asked of him within the framework of a run-oriented offense that relies heavily on play-action passing.

But a big factor in the Falcons’ losses this season has been the results of negative plays and turnovers. And Mariota isn’t the lone man to blame, according to his coach.

“We need to avoid negative plays,” Smith said. “I don’t think an offense is going to be very effective if you’re off track. We’ve been pretty damn good when we’ve been on track. We just haven’t been as consistent lately. Those are things we can eliminate. And that’s not just on the quarterback.”

Atlanta drafted dual-threat quarterback Desmond Ridder in the third round in April’s draft, but Smith shut down any rumors about a potential quarterback change.

“We’re playing the guys who have been playing,” Smith said. “If we were going to make a change, I’d tell you. You’d see it at practice.”

“I think what the Bears have done is they’ve found an identity,” Smith said. “They have a formula right now. You see what their numbers are running the football as well as anybody, and (Fields) is a huge part of that.”

–Chicago enters its game with Atlanta ranked first in the NFL in rushing (201.7 ypg). A big reason for that has been Fields, who passed for 167 yards and two touchdowns and ran for 147 yards and two scores in last week’s 31-30 loss to Detroit.

Fields has been one of the most dynamic players in the league over the last few weeks.

“You can definitely see his confidence growing,” Smith said “He’s strong as hell. He’s certainly probably the strongest guy they got in the backfield so he’s doing a nice job. We are going to have to stop the run, not just him.”

–Atlanta rookie wideout Drake London caught his third touchdown pass of the season in last week’s 25-15 loss to Carolina. It was his first touchdown reception since Week 3’s 27-23 road win over Seattle.