Arrests made in Dallas homicide with link to Cowboys’ Kelvin Joseph 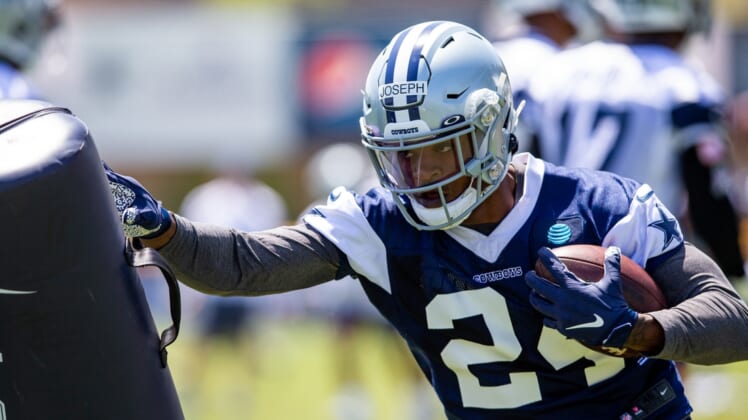 Police in Dallas arrested two men on Saturday in connection with a homicide about which Cowboys cornerback Kelvin Joseph was questioned.

Joseph was interviewed Friday afternoon at the office of his attorney about the shooting death of Cameron Ray, 20, on March 18 in the city’s Lower Greenville district.

Joseph’s attorney, Barry Sorrels, told multiple outlets earlier that Joseph was a passenger in a vehicle from which someone fired gunshots, but that the 22-year-old did not commit a crime.

Dallas police announced the arrests of Aries Jones, 28, and Tivione English, 21, of Baton Rouge, La., in connection with the homicide.

Joseph is from Baton Rouge and played at LSU before transferring to Kentucky.

Dallas police released a surveillance video that showed an altercation between two groups of friends — with Joseph in one group and Ray in another. Shots later were fired from an SUV toward Ray and his friends, The Dallas Morning News reported.

Police reported to the site of the shooting in the 3600 block of Greenville Avenue and found Ray, who had been shot in the head. He died at a local hospital.

The Cowboys issued a statement Friday.

“The Dallas Cowboys are aware of the tragic incident that occurred in Dallas on March 18,” the statement read. “First and foremost, our hearts go out to Mr. Ray’s family and loved ones. The organization is aware of Kelvin Joseph’s possible connection to this incident. We are in contact with Dallas law enforcement and have alerted the NFL office. We have no further comment at this time.”

The Cowboys selected Joseph with the 44th overall pick in the 2021 NFL Draft.

He appeared in 10 games (two starts) for the Cowboys last season, recording 16 tackles, two passes defensed and a fumble recovery.