Armando Bacot stars as No. 1 North Carolina rallies past Charleston 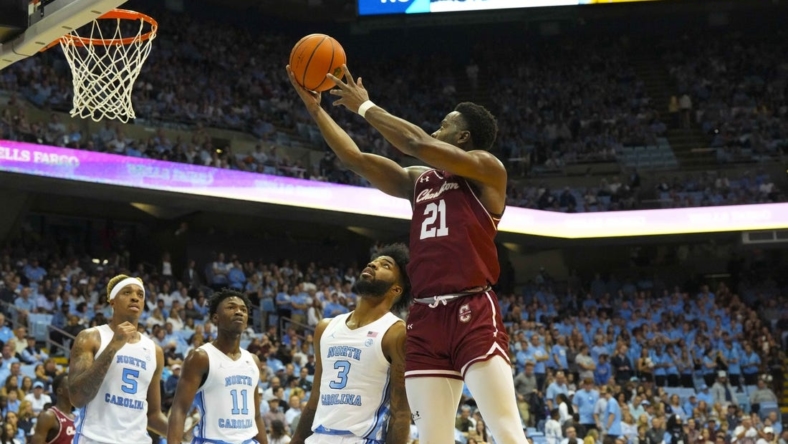 Armando Bacot scored 28 points as No. 1 North Carolina overcame a halftime deficit to top the College of Charleston 102-86 in Chapel Hill, N.C.

All but one point in Bacot’s scoring total came in the second half. The big man also had six boards and three steals for the Tar Heels (2-0)

Caleb Love shot just 1-of-9 from behind the arc for UNC, but he made 8-of-11 free throws on his way to tallying 25 points. He also added nine rebounds and six assists, both of which were team-highs. Love’s rebounding total was a career-best.

Leaky Black added 15 points on a perfect 6-of-6 shooting for UNC, and RJ Davis notched 11 points.

It seemed like there was an upset brewing inside the Dean Smith Center at halftime as Charleston led 50-43 over the top-ranked Tar Heels at the break. UNC struggled to get the ball to Bacot — the preseason ACC Player of the Year — in scoring positions, as he had just one shot attempt in the first half.

Things changed after intermission though. The Tar Heels fed their big man and he rattled off 19 points as UNC outscored Charleston 37-22 to start the second half, taking an eight-point lead. For the game, Bacot finished 10-of-13 from the floor and 8-of-12 from the charity stripe.

The Tar Heels play two more mid-majors at home — Gardner-Webb on Tuesday and James Madison on Nov. 20 — before heading to the Phill Knight Invitational in Portland, Ore.