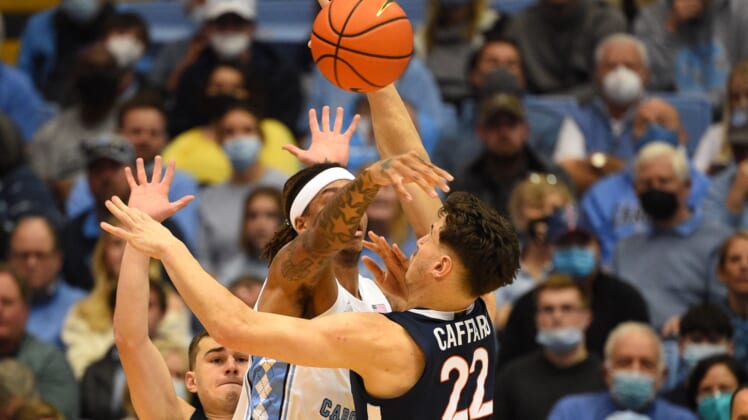 Armando Bacot collected 29 points and a career-high 21 rebounds as North Carolina snapped a seven-game losing streak against Virginia, courtesy of a 74-58 victory on Saturday in Chapel Hill, N.C.

Brady Manek contributed 19 points and five assists while Caleb Love added 16 and five, respectively, as North Carolina (11-4, 3-1 Atlantic Coast Conference) pulled away in the second half.

The Tar Heels enjoyed a 14-4 edge on second-chance points, most of them as Bacot scored on five putbacks. After a loss at Notre Dame on Wednesday, Bacot called North Carolina’s effort “embarrassing” and “unacceptable.”

The Tar Heels’ dominance of the offensive glass came despite the absence of 6-foot-11 starter Dawson Garcia (concussion). Manek, who started in his place, hit 5 of 9 shots from 3-point range.

North Carolina seized control midway through the second half with a 10-point run. Bacot had two baskets before Love and Manek each made a 3-pointer to stake the Tar Heels to a 57-38 lead.

Justin McKoy, who played two seasons at Virginia and returned on Saturday from COVID protocol, helped keep North Carolina in charge with a 3-pointer.

North Carolina led most of the first half but Virginia stayed close until the final five minutes. Love sparked the Tar Heels with two jumpers from well beyond the 3-point arc. He also had a steal and a pull-up shot in transition during the spree to help North Carolina to its biggest lead of the half, 31-24.

Shortly after intermission, Manek drained a corner 3 and Bacot threw down a slam dunk to push the Tar Heels’ advantage into double digits.