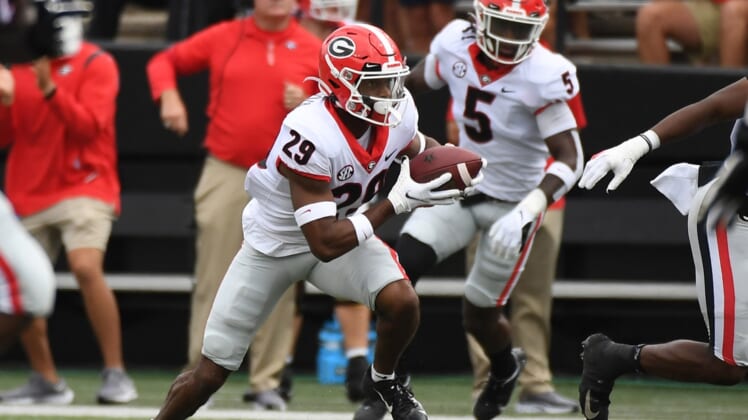 No. 2 Georgia and No. 8 Arkansas will each look to make a statement when they meet in what has unexpectedly emerged as a pivotal Southeastern Conference game with College Football Playoff implications between undefeated teams on Saturday.

Background on Arkansas vs Georgia

The Bulldogs are coming off a 62-0 shutout at Vanderbilt after they jumped out to a 35-0 lead in the first 11:52. Georgia rolled up 524 yards and scored eight touchdowns while holding the Commodores to just four first downs and 77 total yards.

Arkansas has its highest ranking since Week 2 of the 2012 season and is seeking its first 2-0 start in conference play since 2006 after a 20-10 win over then-No. 7 Texas A&M last Saturday in Arlington, Texas.

The Razorbacks jumped out to a 17-0 lead and outgained the Aggies 443-272 en route to ending a nine-game losing streak to Texas A&M and improve to 4-0 for the first time since 2003.

“[Arkansas head coach Sam Pittman] is a tremendous leader of men, and that’s the No. 1 discipline we’re charged with. How do you lead your men and how much do they believe in you and that? He’s got the ultimate right now going on because 100 percent of the men in that locker room believe in Sam Pittman and what he tells them to be true, and they go out and play like it.”

However, Georgia will represent the toughest challenge for the Razorbacks, who also have a 40-21 win over then-No. 15 Texas. Arkansas is amid a stretch in which it plays four straight games against ranked teams. It faces No. 12 Ole Miss and No. 22 Auburn after visiting Georgia.

Georgia quarterback JT Daniels is 54-for-71 passing (76.1 percent) for 567 yards with five touchdowns and two interceptions in three games this season, having missed a blowout win over Alabama-Birmingham on Sept. 11 with a strained oblique.

True freshman tight end Brock Bowers has emerged as the team’s best receiver, as he leads the team in catches (18), yards (272) and touchdowns (four). Jermaine Burton is averaging 18.3 yards per catch with 219 yards and a pair of scores on 12 receptions.

Arkansas counters with quarterback KJ Jefferson, who is 46-for-78 passing (59 percent) for 844 yards with six touchdowns and two interceptions and has rushed for 230 yards and two touchdowns on 32 carries, an average of 7.2 yards per attempt that’s tied with Dominique Johnson for the team lead.

“For us and what we ask [KJ] to do, he’s perfect for what we do,” Pittman told reporters.

Trelon Smith has rushed for a team-leading 298 yards and is tied with Johnson for the team high of three rushing touchdowns. But the run game will be tested against Georgia, which is ranked sixth nationally in run defense (66.0 rush yards allowed per game) and seventh in yards per carry (2.18).