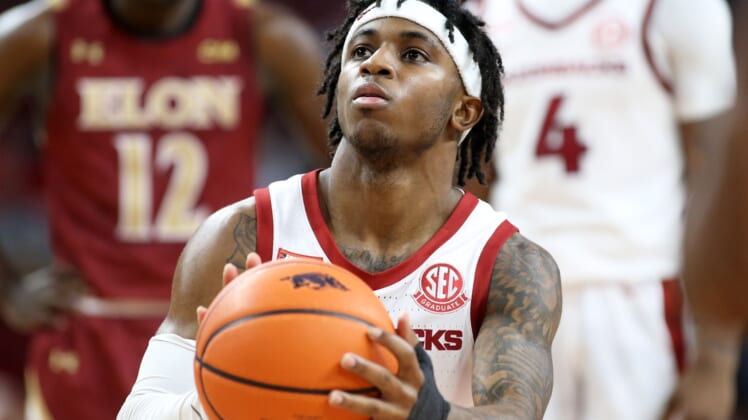 Molinar and Jeffries are averaging 16.9 and 10.9 points, while Garrison Brooks is averaging 11.7 and Shakeel Moore 10.7 for Mississippi State.

Mississippi State ranks 39th nationally in field-goal percentages (47.8%) was No. 31 in KenPom.com adjusted offensive efficiency through games played on Monday. Its 84 points against Winthrop marked the Bulldogs’ most in the past 10 games, and 10 more than their season average.

“We like to get out and run in transition, get easy points,” Jeffries said. “When I get it, coach (Ben Howland) wants me to push the ball, and when Iverson gets it, he’s pushing the ball.”

The Bulldogs still adhere to the ball-control style typical of Howland-coached teams, however, with one of the most methodical approaches in the nation per KenPom.com metrics. Their possessions average more than 18 seconds in length, and they rank No. 321 nationally in adjusted tempo.

Notae scored 15 as Arkansas matched its season scoring average in an 81-55, Dec. 21 win over Elon. Chris Lykes contributed 21 points in his first start of the season and boosted his scored average to 13.2.

“I’ve always been small. I’ve always had to figure out how to get my shots over taller defenders; how to be quicker, how to use my size as an advantage,” the 5-foot-7 Lykes said in an interview on ArkansasRazorbacks.com.

Lykes and Notae went a combined 5-for-22 in a Dec. 11 loss to Oklahoma, and both started on the bench in a Dec. 18 game against Hofstra. In that one, the Razorbacks lost, 89-81, but the duo was much more efficient, making 13 of 27 shots while combining for 39 points.