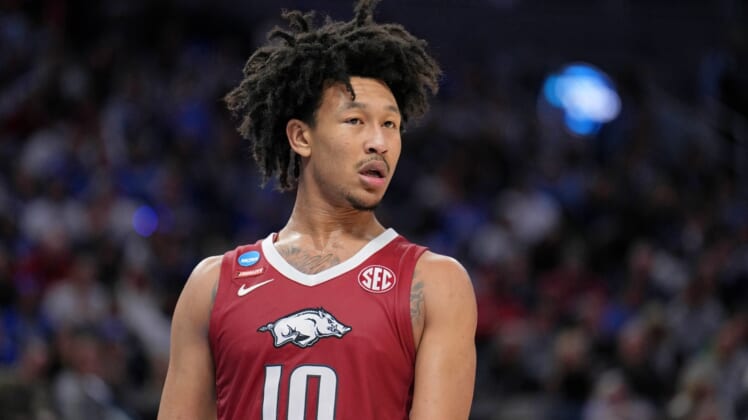 Arkansas power forward Jaylin Williams declared for the NBA draft on Monday and said he will not hire an agent.

By maintaining his college eligibility, Williams will have the option to return to the Razorbacks if he doesn’t feel comfortable with his draft standing.

“I am announcing my intention to enter the 2022 NBA Draft process,” Williams said. “However, I will not be hiring an agent to keep my eligibility with the University of Arkansas intact. I look forward to learning from the upcoming process, going through the interviews, gathering feedback and building relationships with NBA coaches and front office personnel.

“My gratitude to Coach (Eric) Musselman and the staff goes beyond words for helping me be in this position. I will keep all my options open and, after going through the process and talking with my family, my support group and the Arkansas coaching staff, I will make an informed decision when the appropriate time comes.”

Williams was a key cog in terms of why Arkansas has reached the Elite Eight of the NCAA Tournament in both of his college seasons. The Razorbacks lost to Duke in the West Regional title game this season.

He emerged as the Razorbacks’ second-best player behind star guard J.D. Notae this season. Williams averaged 10.9 points and 9.8 rebounds in 37 games (35 starts) while earning first-team All-SEC honors. He also earned first-team All-SEC Defensive honors while accumulating 48 steals and 41 blocked shots and also having the propensity to draw plenty of charging fouls.

Notae declared for the NBA draft on Sunday. The third-team All-American said he will sign with an agent.