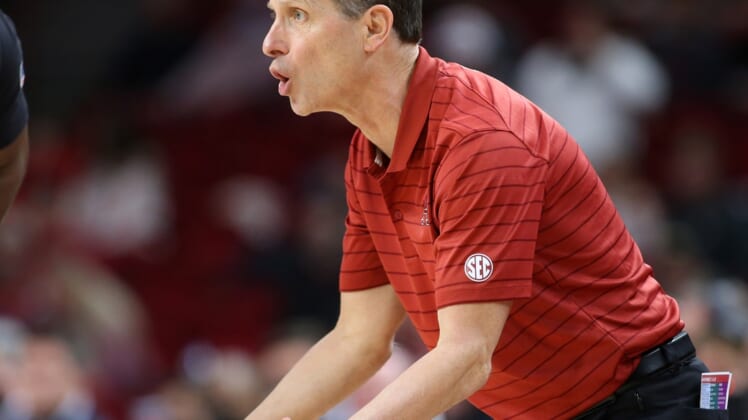 Arkansas coach Eric Musselman tore tendons in his shoulder when colliding into one of his players during practice and will miss at least two games following surgery, the program announced Thursday.

Musselman’s doctor said in a statement that the collision occurred almost six weeks ago, and the initial course of action of physical therapy, treatment and steroid injections could no longer delay surgery.

Assistant coach Keith Smart will take over while Musselman is absent, starting with Saturday’s road game against No. 12 LSU. Smart has spent time as an NBA head coach with the Cleveland Cavaliers, Golden State Warriors and Sacramento Kings.

Musselman revealed on social media that Trey Wade — a 6-foot-6, 220-pound forward — was the player he collided with.

He quote-tweeted a highlight clip of Wade and wrote, “Can confirm. @treywade35 is not the player you want landing on you…” adding a laughing emoji.

Can confirm. @treywade35 is not the player you want landing on you… ?? https://t.co/g7iNZzirw8