Preview: Rebels look to turn page against No. 23 Arizona State 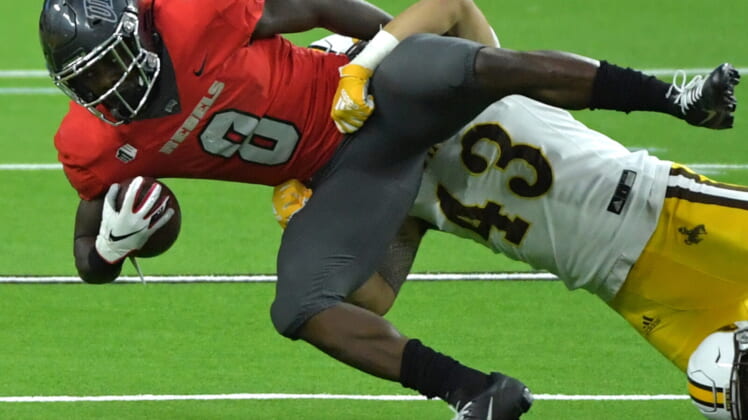 Eight days ago, UNLV Rebels football took the field for its first time this season and lost 35-33 in double overtime to Big Sky opponent Eastern Washington inside Allegiant Stadium. The Rebels (0-1) will have to turn the page as they head to Tempe, Arizona, and take on No. 23/25 Arizona State (1-0) at Sun Devil Stadium.

Head coach Marcus Arroyo told the media Monday that the goals for Saturday will be to focus on what can be changed to benefit the team despite going on the road and facing a ranked opponent.

“We’re going on the road – for really the first time in our program – to a really hostile environment, with crowd, with a really good football team, a well-coached football team with a class that has been recruited for four, five years,” Arroyo said. “That’s going to be challenging in itself but then you still have to execute what wins and   fix from things the week before.

“The challenge really is to make sure we bullet those things out, make sure they can regurgitate that stuff to you, what do we need to fix from last week and then what can we expect going into this week.”

Here are three things to watch for Saturday’s matchup.

There were many bright spots from week one despite taking the loss and the first is the run game.

Those 177 yards gave the Chuck Wagon more than 3,000 yards on the ground for his career and looks to continue that against a tough Sun Devils’ run defense that only allowed 78 yards last week against Southern Utah.

The offensive line and other run blockers will have to step up and create gaps if they want Williams to run all night.

On the other side of the ball that worked last week was the defense, led by junior linebacker Jacoby Windmon and senior linebacker Austin Ajiake, who both recorded double digit total tackles.

Ajiake, who is now playing inside linebacker, recorded five solo tackles and helped out on another five.

He said his success was a result of the planning his coaches and teammates did ahead of the team’s week one matchup.

The 6-foot-2 senior linebacker and the defense will face an Arizona State team that features not one, but two running backs in senior Rachaad White and sophomore Deamonte Trayanum, who both combined to record at least eight yards per carry last week.

Ajiake said the duo of ASU’s ground game, in addition to junior quarterback Jayden Daniels, will be something the Rebels’ defense will have to watch.

“The run game, especially,” Ajiake said. “They have two big backs, who run hard. The quarterback is good as well. The good thing about college football is every game is winnable. You saw that last weekend with a bunch of upsets, so we go into every game thinking we have a chance and believing that we do have a chance.”

Against Southern Utah, Arizona State ran the ball 40 times compared to throwing the ball only 18 times

2. Penalties & Turnovers: the two issues that hurt your club against Arizona State

Penalties and turnovers will always harm a football team.

Against Eastern Washington, the Rebels recorded seven penalties for 60 yards to go along with two turnovers.

Arroyo said limiting penalties will be key to be successful tomorrow.

“We’ve got to be a disciplined football group to make sure we don’t put ourselves behind the stakes,” Arroyo said. “We’re not there yet to overcome those type of things. That penalty battle, the turnovers we had, what we call ‘drive killers’ and things that hold you back from successful drives, we’ll make sure we highlight those and see opportunities missed.”

Saturday’s matchup will mark the first time UNLV football will play on either ESPN or ESPN2 since 2018 when the Rebels took down San Diego State in a Mountain West Conference game.

UNLV and Arizona State were originally set to face off last year, but the game was cancelled due to COVID-19 and rescheduled to take place in 2027. Saturday will be the second meeting between the two programs and first since 2008.