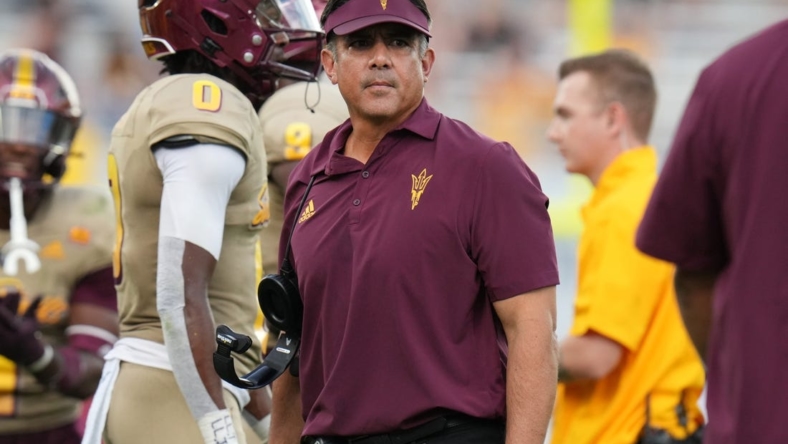 Arizona State is out of bowl contention and interim coach Shaun Aguano may be out of a job in two weeks heading into the remaining games against No. 23 Oregon State and archrival Arizona.

Arizona State is 1-4 against ranked opponents with the lone win coming against Washington at Tempe three games into Aguano’s tenure. He took over for the fired Herm Edwards on Sept. 18 after the Sun Devils’ 1-2 start.

Aguano has gained support from fans and his players since the win over Washington, but the Sun Devils have lost three of their last four games.

The school has hired an outside consulting firm in its search for the next permanent head coach. Aguano is still under consideration, according to school officials.

“The continuity, the passion for Arizona State football … it’s hard for somebody to come from the outside that has no idea what Arizona State football means to people,” Aguano said. “I think that’s No. 1, especially in this transition in understanding what type of recruited athletes that we want here, to build a program that is disciplined and held accountable, and put on a product that is tough, that never quits.”

Aguano made the bold move of replacing starting quarterback Emory Jones with Trenton Bourguet, a former walk-on who directed wins against the Huskies and Colorado.

Bourguet was pulled from Saturday’s 28-18 loss at Washington State with an undisclosed injury and his status is unknown for the game against Oregon State.

Oregon State has injury concerns of its own with nine players getting hurt in a 38-10 win over visiting California last week.

The Beavers could reportedly be without as many as six starters, including safety Jaydon Grant, cornerback Alex Austin and linebacker/running back Jack Colletto.

“We’re not the only program dealing with that,” Oregon State coach Jonathan Smith said of the injuries. “Shoot, we’re playing Arizona State, and they’ve had a bunch. I look across the league. It’s an unfortunate part of the game. No one is playing with their full roster at the end of the year.”

Smith added that he believes Oregon State will “compete well” against Arizona State despite the rash of injuries.

He pointed out that the Beavers still defeated the Golden Bears handily despite missing some of their key players.

“I think it’s due to our culture around here, that guys are preparing even if they haven’t done a ton of playing time, but they’ve been ready,” Smith said.

Oregon State is led by redshirt freshman Ben Gulbranson, who is playing in place of the injured Chance Nolan (neck and concussion problems). Gulbranson has completed 88 of 141 passes for 1,042 yards with seven touchdowns and three interceptions.