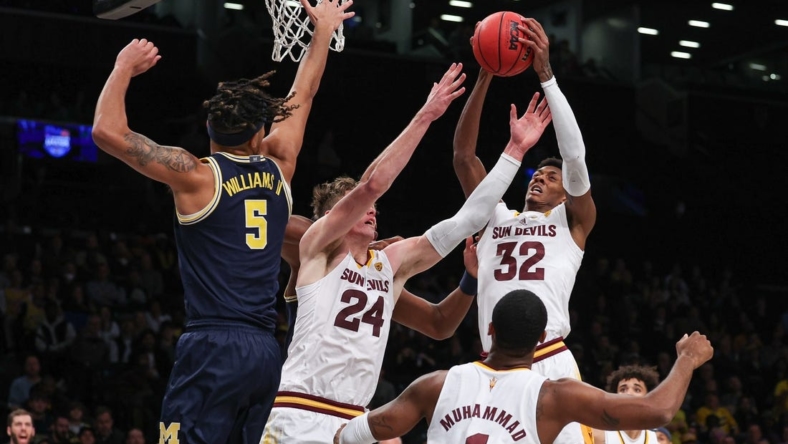 The victory is the largest in the Sun Devils’ history over a ranked opponent.

Austin Nunez had 15 points and Luther Muhammad scored 13, both off the bench.

The Sun Devils (4-1) built on to their lead after taking a 15-5 lead five minutes into the game by shooting 60.4 percent from the field for the game.

The Wolverines made 33.9 percent of their shots from the field, including 4 of 22 (18.2 percent) from beyond the arc.

Michigan coach Juwan Howard and Arizona State coach Bobby Hurley faced each other on opposites of the court for the first since they were players in the 1992 NCAA championship game when Hurley and Duke defeated Howard and the Wolverines 71-51.

Arizona State, which outlasted VCU 63-59 on Wednesday, has won consecutive games since its overtime loss at Texas Southern on Sunday.

The Sun Devils took a 34-13 lead with 6:55 remaining in the first half after going on a 14-3 run sparked by Nunez’s eight points — including two 3-pointers.

The Sun Devils led 46-28 at halftime behind 11 points from Nunez and 10 apiece from Horne and Cambridge.

The Wolverines did not get closer than 15 points in the second half.

A 13-2 run that gave Arizona State a 71-43 lead, put the game away. Horne had seven points in that stretch.