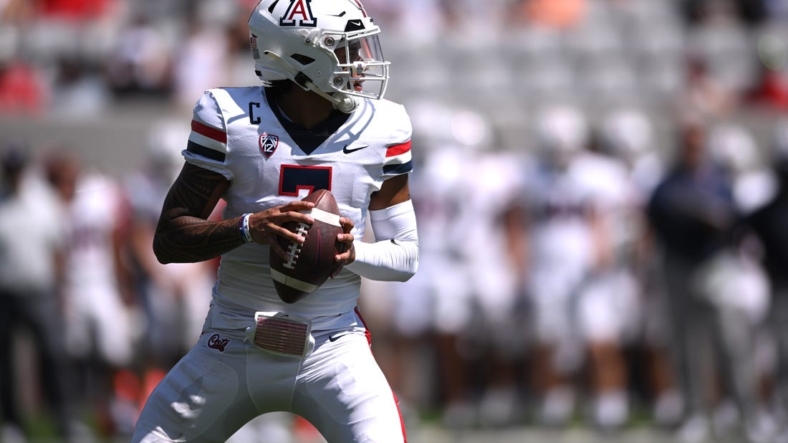 Jayden de Laura led a new-look Arizona offense, throwing for 299 yards and four touchdowns as the visiting Wildcats surprised San Diego State 38-20 on Saturday in the debut of the Aztecs’ new on-campus stadium.

De Laura, a transfer from Washington State, connected on scoring passes of 17, 4 and 25 yards to UTEP transfer receiver Jacob Cowing. The other touchdown pass went to freshman Tetairoa McMillan, while Florida State transfer DJ Williams ran for a team-best 88 yards and one score.

San Diego State, in the season-opener for both teams in Snapdragon Stadium, managed just 232 yards. Virginia Tech transfer Braxton Burmeister completed 5 of 10 passes for 51 yards, with one touchdown and one interception, before leaving midway through the third quarter with a reported right shoulder injury.

Arizona led 31-10 in the third quarter, but San Diego State briefly rallied with the help of a bizarre touchdown. Arizona’s Kyle Ostendorp, punting from the back of his end zone, kicked the ball into the arm of his backfield blocker, with the Aztecs recovering to make it 31-17 with 7:46 to go in the quarter.

After an SDSU field goal, Williams gave Arizona the breathing room it needed with a 10-yard run to make it 38-20 with 13:02 left in the game.

Arizona, which entered having lost 23 of its past 24 games, scored on its first three possessions, going up 17-3, but then lost a fumble at its 32. San Diego State took advantage, with Burmeister converting on fourth-and-2 by throwing an 11-yard touchdown pass to Tyrell Shavers with 4:49 left in the first half.

The Aztecs intercepted de Laura at the UA 40 on the next possession. But a 25-yard touchdown run was called back by a holding penalty and, one play later, Arizona’s Jaxen Turner picked off a tipped pass.

The Wildcats then marched 54 yards and went up 24-10 with 28 seconds left before halftime when Cowing caught a 4-yard pass.