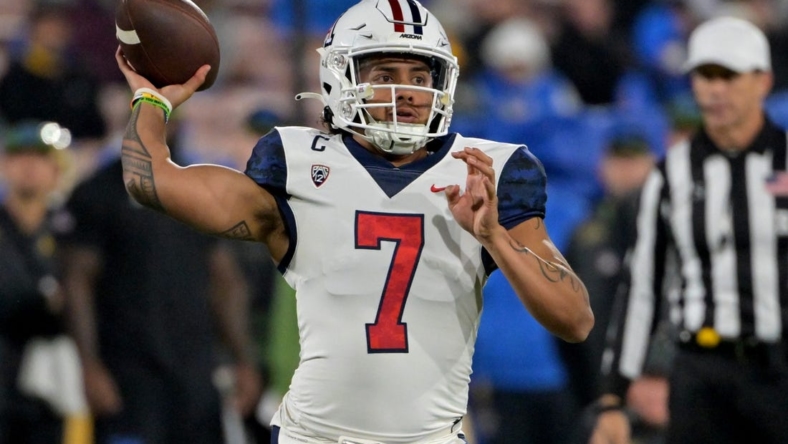 De Laura was the Pac-12 Freshman of the Year last season with the Cougars, but Washington State went in a different direction. The Cougars brought in FCS star Cameron Ward, who followed his head coach at Incarnate Word, Eric Morris, to Pullman. Morris is WSU’s offensive coordinator/quarterbacks coach.

De Laura, meanwhile, looked around for greener grass, finding it at quarterback-needy Arizona.

De Laura has been a game-changer at Arizona, ranking sixth nationally in passing yards (312.8 per game). His ability to extend plays was critical last Saturday as the Wildcats (4-6, 2-5 Pac-12) upset then-No. 12 UCLA 34-28 in Pasadena. Arizona needs to beat Washington State and then Arizona State to become bowl eligible after going 1-11 in 2021.

Ward already has helped lead the Cougars (6-4, 3-4) to bowl eligibility. He is passing for 257.9 yards per game, but defense has been more of the team’s calling card of late. Washington State has allowed more than 24 points in just two games (Oregon, Southern California) this season.

The Cougars rank 20th nationally in scoring defense at 19.8 points per game. Coach Jake Dickert said he expects a challenge from de Laura, acknowledging that he had seen the quarterback’s comments this week.

“I’ve always been really impressed with what Jayden can do,” Dickert said. “I appreciate everything he’s done for us. … Sometimes change is good for everybody.”

Arizona, which lost starting left tackle Jordan Morgan for the rest of the season due to a reported knee injury last week, will be trying to win consecutive games for the first time since early October 2019.

“We need to find a way to get grounded quick,” said coach Jedd Fisch. “Our guys, they seem very grounded. They seem focused on trying to get another one.”