Arizona Diamondbacks score 3 to tie in 9th, 5 in 10th to beat Reds 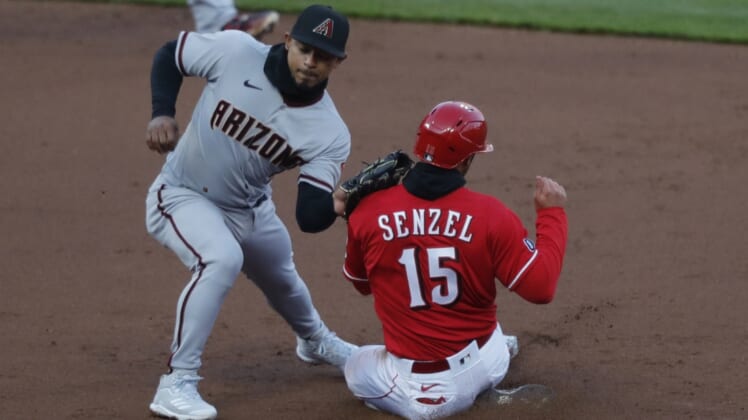 Josh VanMeter hit a tying three-run homer in the ninth inning against his former team, and the visiting Arizona Diamondbacks scored five times in the 10th to rally for an 8-5 win over the Cincinnati Reds on Wednesday night.

Trailing 3-0 in the ninth, Arizona took advantage of struggling Cincinnati reliever Amir Garrett (16.20 ERA), who walked two of the first three batters he faced. Then he served up the homer to VanMeter, who played parts of 2019 and 2020 with the Reds, a shot that landed in the concourse opening in the right-field seats.

The Diamondbacks broke the tie in the 10th off left-hander Cionel Perez (1-2) and Jose De Leon, when Pavin Smith scored on second baseman Alex Blandino’s fielding error. Carson Kelly was hit by a pitch with the bases loaded to make it 5-3, David Peralta then scored on a wild pitch and Arizona broke it open with Wyatt Mathisen’s two-run single.

Cincinnati tried to win it in the bottom of the ninth, but Mark Payton was thrown out at the plate with two outs on Kole Calhoun’s throw from right field — after he failed to make a diving catch and the ball rolled away from him on Tyler Stephenson’s second hit of the night.

Blandino and Tyler Naquin (two hits) added RBI hits in the 10th for the Reds, who have dropped four straight to Arizona this season.

Arizona had just two hits entering the ninth and was stymied by Reds starter Tyler Mahle, who yielded those hits while striking out nine and walking two over 6 2/3 innings.

Cincinnati scored on rookie Jonathan India’s sacrifice fly to deep left field in the fourth. The Reds plated two more in the fifth on an RBI triple from Jesse Winker and Naquin’s sacrifice fly.

Those Reds runs were charged to Arizona starter Merrill Kelly, who yielded five hits with a walk and struck out three over five innings.

This contest began shortly after the resumption of Tuesday night’s series opener that was suspended in the top of the eighth inning due to heavy rain and sleet. The Diamondbacks held on for a 5-4 victory.