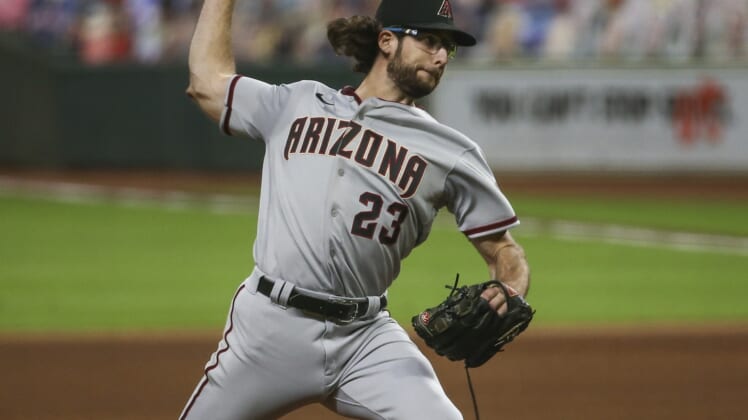 Arizona Diamondbacks right-hander Zac Gallen was scratched from Monday’s scheduled start and could miss the beginning of the regular season due to soreness in his pitching forearm.

The Diamondbacks are waiting on results from Sunday’s MRI exam. The 25-year-old said he also underwent X-rays and a CT scan.

“We’re still gathering information, so it’s tough to really map out a plan,” Gallen told reporters. “For me, though, mentally I’m going to want to be on the field as soon as possible. I’m going to be chomping at the bit.”

Gallen is slated to be the club’s No. 2 starter behind left-hander Madison Bumgarner. He went 3-2 with a 2.75 ERA in 12 starts last season — striking out 82 in 72 innings — and finished ninth in National League Cy Young balloting.

“It’s just not the news you want to hear,” Arizona manager Torey Lovullo said. “You want to start having guys prep and get ready for the season. So I’m not going to sugarcoat it and say that it’s OK. We’re obviously going to get him evaluated and figure out what the best thoughts are moving forward. And we don’t know any of this information right now. So yeah, it’s not it’s not anything I was prepared to hear today.”

Gallen said he first felt soreness in the forearm while batting against a pitching machine on March 10. He said the pain began after he was jammed by a pitch.

Two days later, he pitched in a spring training game and felt soreness when he would throw curveballs. But he pitched 3 1/3 scoreless innings and gave up just one hit against the Los Angeles Angels.

Things didn’t go as well in his March 17 start against the Texas Rangers, when he gave up three runs and six hits over 4 1/3 innings.

Gallen said he doesn’t want to jump to conclusions until the test results are known.

“I don’t think we have all the information so it’s tough to say,” Gallen said. “Of course, you’re going to be concerned, probably overly concerned than maybe one needs to be. At the same time, I know between the training staff here and the training staff at my agency, everyone is going to put me in the best hands possible to get this figured out and get me back to 100 percent, and back on the field as healthy as one would hope to be.”

Arizona opens the season on April 1 in San Diego against the Padres.