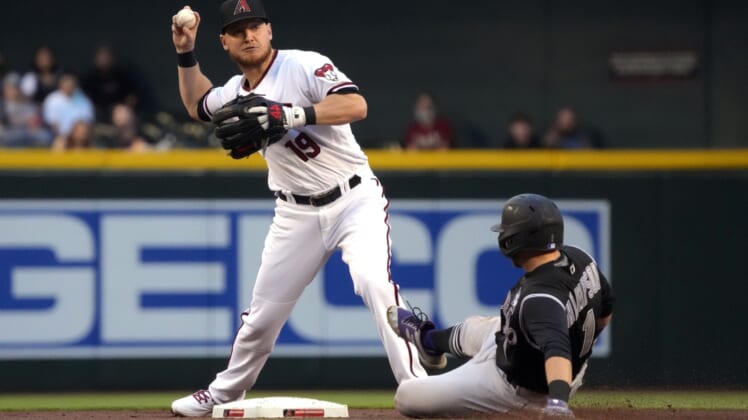 Eduardo Escobar’s RBI triple in the seventh inning gave the Arizona Diamondbacks their go-ahead run in a 5-3 win over the Colorado Rockies on Thursday night at Phoenix.

Five of Arizona’s 12 hits went for extra bases, and eight of the hits occurred with two outs.

Escobar’s first triple of the season came against Colorado reliever Robert Stephenson, whose error allowed the previous batter, Josh VanMeter, to reach first base to start the seventh inning.

Stephenson (0-1) dropped the throw from second baseman Garrett Hampson while running to the bag. VanMeter’s run on Escobar’s triple gave Arizona a 4-3 lead.

David Peralta, who went 3 for 5 with two RBIs, followed with a single to score Escobar.

Escobar was 2 for 5 with two runs and an RBI, and Josh Rojas was also 2 for 4 with his second home run of the season.

Crichton pitched the ninth and picked up his third save.

Colorado, which is 1-9 on the road this season, chased Weaver after building a 3-1 lead going into the bottom of the fourth.

The Rockies scored the game’s first run in the second inning on an RBI double by Charlie Blackmon.

Hampson started a third-inning rally with a double, and Trevor Story followed with a triple. Ryan McMahon single then score Story.

Peralta’s RBI triple in the bottom of the third got the Diamondbacks on the board. The hit followed Escobar’s two-out single.

Rojas started the fourth inning for Arizona with a home run, and two outs later, Daulton Varsho pinch hit for Weaver and doubled to right field. He scored on Pavin Smith’s double to tie the game at 3.