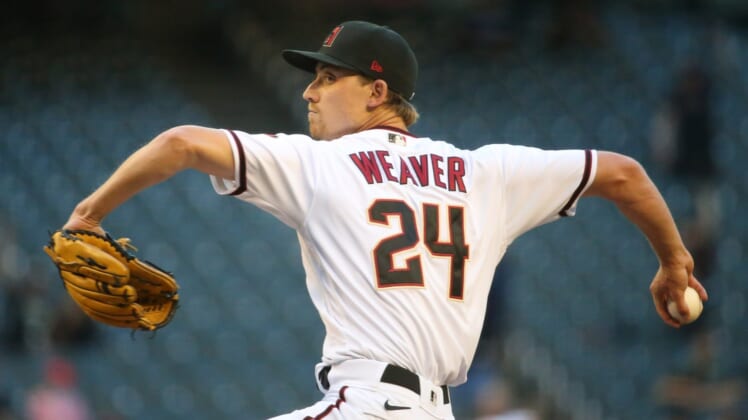 Arizona Diamondbacks starting pitcher Luke Weaver (24) throws against the Miami Marlins during the first inning at Chase Field May 10, 2021.Marlins Vs Diamondbacks

Weaver, 27, left his start Sunday against the Washington Nationals after four innings with shoulder soreness. He is 2-3 with a 4.50 ERA in eight starts this season, one year after he led the major leagues with nine losses in 12 starts.

Martin was immediately listed as Arizona’s starter for Tuesday’s road game against the Los Angeles Dodgers.

The 25-year-old is being recalled to the Diamondbacks for the first time after he was acquired in 2019 from the Houston Astros in the Zack Greinke deal. He has five games of major league experience with the Astros in 2019, going 1-1 with a 5.59 ERA.

The Diamondbacks have injury issues throughout their rotation. Right-hander Zac Gallen has been out with an elbow ligament strain, while right-hander Taylor Widener has a groin strain.

And in Monday’s game against the Dodgers, left-hander Madison Bumgarner left after four innings with an adductor spasm. Arizona manager Torey Lovullo indicated afterward that Bumgarner’s injury is not considered serious.

The Diamondbacks are in the midst of a four-game series at Los Angeles with no starter officially listed for the final three games until Martin was added into the mix.