In addition to being the No. 1 overall pick in the 2019 NFL Draft, Arizona Cardinals quarterback Kyler Murray was also a top-10 pick in the MLB Draft the previous year, which created an instantly-amazing “what if?” sports scenario.

While Murray ultimately gave up his chance to play for the Oakland Athletics organization, what if football and baseball weren’t either/or options for Murray? The rising NFL star spoke out recently about potentially pursuing his MLB dream sometime in the future, per official Cardinals reporter Darren Urban:

“If the time came where I got to do what I wanted to do, which, I don’t know, but I’m leaving it open. I think I can still play for sure. […] I know everybody around (the organization) probably feels different about it…But me personally, I played the game my whole life. If I ever had the opportunity, for sure, I would definitely go for it. What are we talking about? I’m sure anyone asking me about it would (take that opportunity) too. I’m not trying to start anything. I’m just talking.”

Murray has been making headlines recently for his forthcoming cover story on Sports Illustrated, which featured him and his Esports video gaming team. That seems to be his other competitive, so-called athletic outlet beyond the gridiron, yet he wouldn’t have said anything about baseball if he weren’t passionate about it.

Part of his contract with the Cardinals stipulates that Murray isn’t allowed to play baseball, which makes sense. Arizona selected Murray first overall just one year after using a top-10 pick on QB Josh Rosen. Thus far, it’s looked like a brilliant move.

Why juggling NFL and MLB is impossible for Kyler Murray

It’d be one thing of Murray was, say, a situational gadget player in the NFL whose athleticism could be occasionally deployed as an X-factor, or if he played a position that required less overtime, film study and responsibility.

The reality is, though, that Murray plays quarterback. He’s the face of an NFL franchise. To be among the true elite signal-callers in the sport, Murray needs to spend many off hours in the film room, at the Cardinals’ facility or working on his craft in some other way.

All this doesn’t leave a lot of room for Murray to pursue baseball, much less meet those responsibilities. Maybe if he were, like, a 30th-round pick who wasn’t expected to contribute much, that’d be one thing. Alas, the A’s spent the ninth overall pick on Murray, and if he were to play, they’d want his undivided attention.

Baseball was part of the reason Murray was viewed as a bit of a wild card coming out of Oklahoma. He was an undersized one-year starter who, yes, won the Heisman Trophy, but had the chance to be a legitimate star in another major pro sport, too. 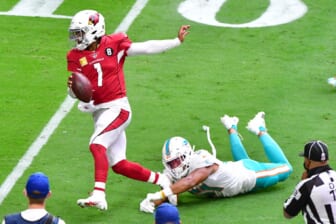 Any adversity in the NFL could give Murray second thoughts about whether he chose the right sport and could ultimately send him back to the diamond.

The good news for Arizona fans is that Murray has hung in there so far. He showed marked improvement as an NFL sophomore in 2020. Murray embraced his unique rushing ability and racked up 819 yards on the ground with 11 touchdowns, and saw his passer rating jump from 87.4 to 94.3.

Murray’s incredible speed and arm talent are enough to eventually put the Cardinals in Super Bowl contention if they surround him with the proper team. Even in the highly competitive NFC West, Arizona should feel good about having Murray under center.

For now, let’s take Murray at his word and assume he really is “just talking” about baseball. If the Cardinals fall short in 2021, his head coach Kliff Kingsbury gets fired and Murray gets banged up during the 17-game schedule, maybe then we can reassess what the 23-year-old prodigy’s future may hold.

As long as he can avoid major injuries, it stands to reason Murray could play in the NFL for more than a decade at a high level and still have a window of several years to try to make it to the MLB stage if he so desires.