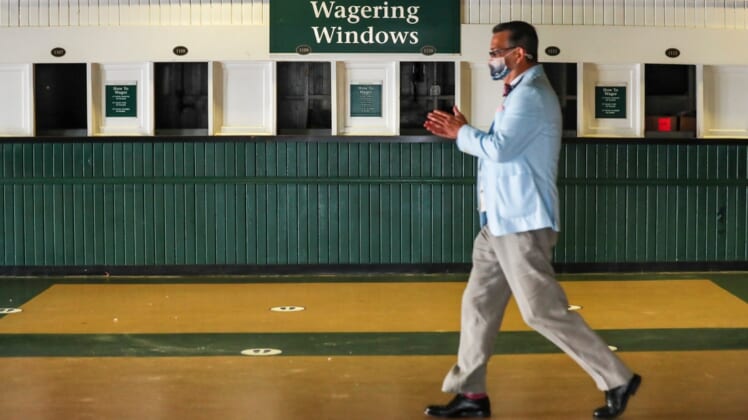 Sep 4, 2020; Louisville, Kentucky, USA; A man rubs his hands with sanitizer as he walks past empty Wagering Windows at Churchill Downs on the 2020 Oaks Day Friday morning. No fans are allowed for Oaks nor the Kentucky Derby due to Covid-19: only horse owners, trainers, jockeys and family. Mandatory Credit: Matt Stone/Louisville Courier-Journal-USA TODAY NETWORK

Arizona took a significant step toward legalizing gambling in time for football season when the legislature passed a bill this week legalizing sports and fantasy betting in the state.

Gov. Doug Ducey is expected to sign the bill into law quickly after it was voted through Monday by a 23-6 count. According to azcentral.com, Ducey was a major proponent of the bill and won the support of tribes in the state for off-reservation sports and fantasy betting in exchange for allowing them to expand casinos in metro Phoenix.

Arizona gaming regulators would then begin to license sportsbooks, presumably in time for the onset of the 2021 football season.

According to draftkings.com, at least 21 states already have in place or have approved legislation for legalized sports wagering in a casino or online since the 2018 U.S. Supreme Court decision opened the floodgates.

Arizona will reportedly be able to host as many as 20 mobile betting operators alongside in-stadium sportsbooks. Also included in the legislation is daily fantasy sports.

Based on the returns generated by other states, the state’s Joint Legislative Budget Committee has anticipated the law will raise approximately $34 million in annual revenue.