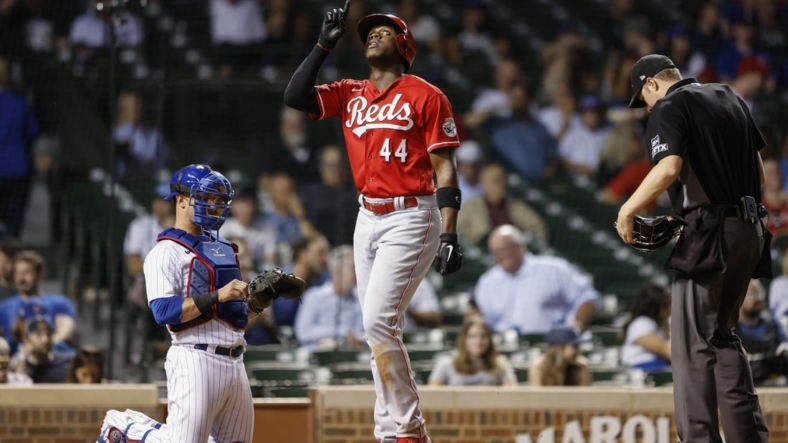 The Cincinnati Reds and Chicago Cubs are looking to finish their rough seasons as effectively as possible.

Each has the chance to record a series victory on Thursday in the finale of a three-game set at Chicago.

After the Cubs (57-79) won 9-3 on Tuesday, Cincinnati (54-80) rode a pair of solo homers and three RBIs from Aristides Aquino to a 7-1 victory on Wednesday. Chicago leads 7-5 during the season set, but the Reds are in position to win back-to-back series overall after taking two of three from the visiting Colorado Rockies last weekend.

Aquino has been a big part of Cincinnati’s winning week. He has endured an inconsistent career since breaking into the majors with the Reds in 2018, but he is 8-for-16 with three home runs and seven RBIs in his past five games.

“I’ve been working so hard at the plate,” Aquino said, according to the Cincinnati Enquirer. “It can be hard, especially when you’re not doing good.

Sampson has not completed more than 5 2/3 innings in any of his past five outings. The right-hander needed 40 pitches to get out of the first inning on Friday at St. Louis and ended up allowing his only two runs of the night during that frame. Sampson also gave up four hits and two walks while striking out four over five innings in an 8-0 Chicago loss.

“You get backed into these corners, you just have to fight to get out,” Sampson said. “As soon as you start to give in, the other team can kind of smell fear, and they just attack.”

Sampson’s only career start against the Reds came at Cincinnati on Aug. 13, when he allowed two runs, six hits and three walks while fanning six over four-plus innings in the Cubs’ 7-2 victory.

The Reds’ Kyle Farmer is 2-for-5 vs. Sampson during his career, while Jake Fraley, who also homered on Wednesday, is 3-for-3 with a double against him.

Due to trades and injuries within Cincinnati’s rotation, and after spending the first 4 1/2 months of the season working out of the bullpen, Luis Cessa (3-2, 5.18 ERA) will make his fourth consecutive start on Thursday.

The five runs he allowed over 11 innings of his previous three starts came on four homers. Cessa tossed a season-high five innings on Friday in a 3-2 home victory over Colorado, giving up two runs on four hits and two walks with four strikeouts.

Cessa has seen plenty of the Cubs this season while allowing five runs, six hits and three walks over 3 1/3 innings spanning four relief appearances. In eight lifetime outings vs. Chicago, Cessa has no decisions and a 6.14 ERA.

Cubs All-Star Ian Happ clubbed one of his 16 homers this season off Cessa but is 1-for-11 in the past three contests overall.