Argonauts out to protect East lead vs. Tiger-Cats 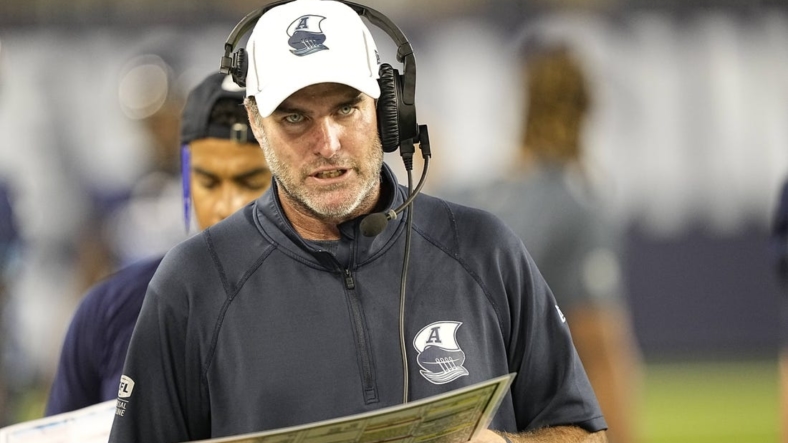 The visiting Toronto Argonauts will be out to clinch the season series with the rival Hamilton Tiger-Cats on Monday afternoon.

The Argonauts lead the four-game season series 2-1 after defeating the visiting Tiger-Cats 37-20 Aug. 26. The home team has won all three games.

Even with a break-even record of 5-5, the Argonauts lead the East Division. The Tiger-Cats (3-8) are in third place.

“Teams are starting to play better towards the end of the year, and you want to be hitting your stride,” Argonauts coach Ryan Dinwiddie said. “It’s (Labor Day) a big game, but we can’t put too much magnitude on it. Players have to go out and do their job, play fast and smart. It’s an important game and we have to be ready to go, but we can’t play tight.”

Toronto outscored Hamilton 27-4 in the second half of the most recent meeting between the teams.

“They’ve definitely been a second-half team,” Tiger-Cats defensive tackle Dylan Wynn said of the Argonauts. “I don’t think it’s adjustment issues we’re running into, it’s execution issues. One or two plays at the wrong times. It’s focus and being locked down to do what we have to do.”

Argonauts defensive back Jamal Peters had three interceptions in the game, returning one 67 yards for a touchdown that helped clinch the victory.

Toronto quarterback McLeod Bethel-Thompson was 19-of-32 passing for 258 yards and three touchdowns.

Rookie Jamie Newman will start at quarterback Monday for the Tiger-Cats. Newman was listed atop the team’s depth chart Sunday, with Jalen Morton as his backup. Dane Evans (shoulder) is listed as the third quarterback and is expected to dress Monday.

Newman has appeared in three regular-season games with Hamilton, completing both passes he has attempted for 4 yards. He has rushed 10 times for 56 yards and scored three touchdowns.

“He’s got to learn from that and it can’t happen,” Dinwiddie said. “You can’t have that stuff.”