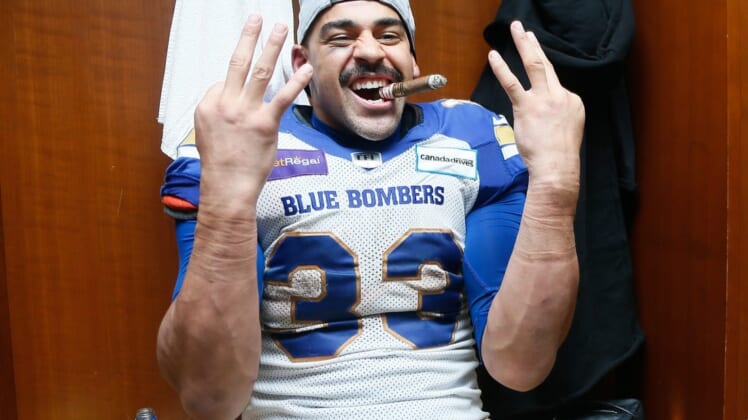 The East Division-leading Argonauts aren’t planning on overlooking the winless Ottawa Redblacks on Sunday in Toronto.

The Argonauts (3-2) are coming off two straight wins over the Saskatchewan Roughriders.

“We know their backs are against the wall,” Toronto coach Ryan Dinwiddie said. “They’ve been in every single game with opportunities to win a lot of them. They’ll be a tough opponent and they’ll have all guns blazing.”

The Argonauts’ most recent victory over Saskatchewan came by a 31-21 score last Sunday on the road despite committing five turnovers and yielding a 112-yard touchdown return on a missed field goal.

Andrew Harris became the first Canadian, and the sixth player overall, to reach the 10,000-yard career rushing mark in the CFL after rumbling for 143 yards on 26 carries against Saskatchewan. He also caught seven passes for 45 yards.

“We’ve done some good things, but we haven’t been as consistent as I want,” Dinwiddie said of his offense. “We haven’t taken that next step of having a complete football game, but we’re getting there.”

Meanwhile, Ottawa receiver Darvin Adams was lamenting a dropped pass in the end zone in the final minute against Montreal.

Adams caught nine passes for 118 yards and a touchdown in the game but said he will remember the one he did not grab.

“I think it’s very important to watch it, to know and to feel it,” Adams said. “Then you move on. As bad as everybody else wanted me to catch it, I wanted to catch it more. I let a lot of people down – myself, my teammates, the coaches, the fans.

“… I should have been at my best when my best was needed. I feel like I wasn’t. I could have caught that and helped the team out tremendously.”

Toronto defensive back Eric Sutton (hip) was listed as questionable.