Sportsnaut
May 19, 2021; Denver, Colorado, USA; St. Louis Blues defenseman Justin Faulk (72) falls to the ice after being hit in the third period by Colorado Avalanche center Nazem Kadri (91) in game two of the first round of the 2021 Stanley Cup Playoffs at Ball Arena. Kadri would be ejected from the game for an illegal hit to the head. Mandatory Credit: Isaiah J. Downing-USA TODAY Sports

Kadri appealed his suspension to Das after his initial appeal to NHL commissioner Gary Bettman was unsuccessful on May 31.

Kadri has served six games of the suspension since his hit on Faulk in Game 2 of the first-round series on May 19. The initial suspension was announced two days later by the NHL Department of Player Safety, and the league’s players’ association filed the appeal on May 23. 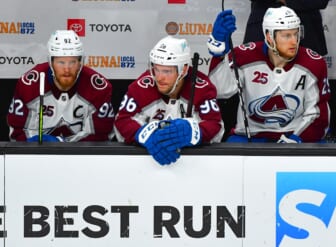 Kadri is eligible to return to the ice for the Avalanche in a potential Game 7 of the second-round series versus the Vegas Golden Knights on Saturday. That series is tied at two wins apiece heading into Game 5 on Tuesday.

Should the Avalanche be eliminated in six games, Kadri will miss the team’s opening contest of the 2021-22 season.