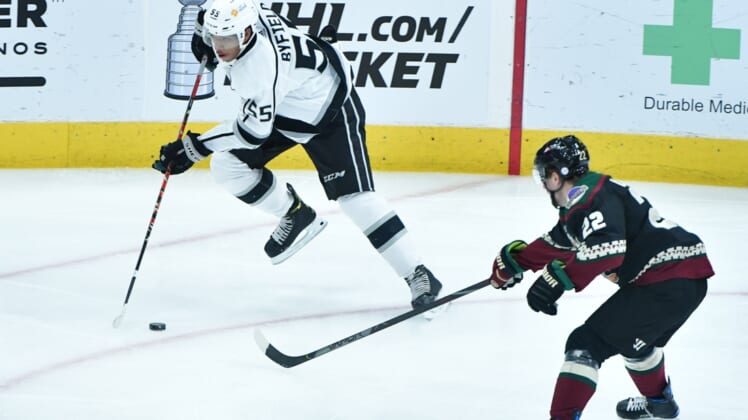 Anze Kopitar scored a goal and had an assist to reach 999 career points and the visiting Los Angeles Kings earned a 3-2 victory Monday to deal a heavy blow to the Arizona Coyotes’ fading playoff chances in Glendale, Ariz.

Trevor Moore and Alex Iafallo also scored goals for the Kings, who kept their own slim playoff hopes still flickering.

Christian Dvorak and Jakob Chychrun each scored goals for the Coyotes, who are five points behind the fourth-place St. Louis Blues for the final West Division playoff spot with three regular-season games remaining. The Blues have six games remaining.

Like the Blues, the Kings have six games remaining, but they are nine points behind St. Louis.

The Coyotes took a 1-0 lead 17:10 into the game when Dvorak took a pass from Lawson Crouse, moved across the front of the crease and scored past Kings goaltender Jonathan Quick while leaving his feet. The score came on just the third shot from the Coyotes.

It took the Kings 35 seconds to answer when Moore scored an unassisted goal, finding a loose puck after a faceoff in the Arizona end and flipping a shot past Coyotes goaltender Darcy Kuemper. It was Moore’s 10th of the season.

Arizona stormed out of the first intermission on the power play and took a 2-1 lead 53 seconds into the second period when Chychrun scored off the left post for his 17th of the season. Chychrun’s total leads all NHL defensemen.

The Kings tied it again at 7:40 of the second period when Kopitar scored off a pass from Adrian Kempe. Kopitar’s 13th of the season gave him 998 career points.

The Kings grabbed their first lead of the game 13:40 into the second period on a power-play goal for a 3-2 advantage. Drew Doughty fired a shot from the right point with Iafallo scoring on the rebound, his 12th. Kopitar had a secondary assist for point No. 999.

Quick did not take the ice after the second period because of an upper-body injury and was replaced by Calvin Petersen. Quick finished with 17 saves, while Petersen had 15. Kuemper had 22 saves for Arizona.