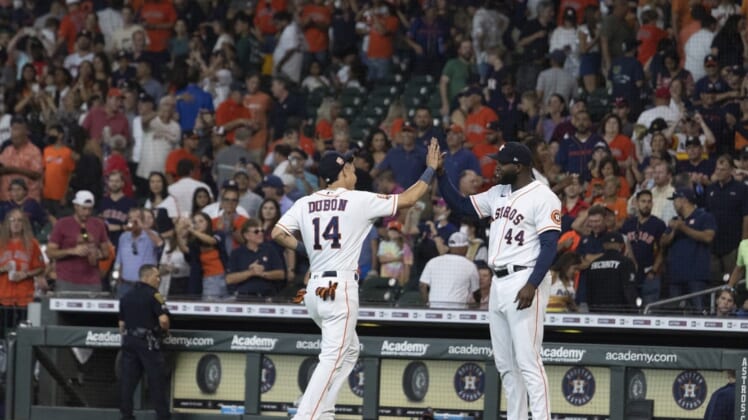 Houston Astros slugger Yordan Alvarez unofficially struck out during the third inning of Wednesday’s game against the Boston Red Sox but nobody noticed.

Umpire Jim Wolf didn’t pull any punch-out theatrics and Boston catcher Reese McGuire tossed the ball back to left-hander Rich Hill. Nobody in the Red Sox dugout pointed out that the at-bat was over.

Meanwhile, Alvarez stayed put in the batter’s box for the next offering of his four-strike at-bat.

Hill’s first pitch of the at-bat was a ball and the second was a called strike. Alvarez then fouled off a pitch that landed near the third-base dugout for strike two.

Then Hill threw a changeup that Wolf called a strike. But play continued on as if were just strike two.

On the “1-3” count, Alvarez bounced out to first base for the first out of the inning.

Astros manager Dusty Baker said he wasn’t aware it happened until told by reporters after the contest.

“Everybody missed it,” Baker told reporters.

Alvarez isn’t a player that you want to give extra pitches if you’re the opponent. He has 30 homers and 72 RBIs in 89 games.

The Astros won the contest 6-1 despite Alvarez going hitless in four at-bats with an RBI.